30 Duolingo Memes so Funny They Will Make You Pee


30 Duolingo Memes so Funny They Will Make You Pee

What’s Duolingo you may ask? Well it’s a platform for learning languages featuring its mascot: a sociopathic owl. This mean green flying insult machine, specializes in spewing threats at its users so that they continue on their course.

If it detects a period of inactivity on your part, it will start by sending snarky notifications with veiled threats. However, ignore these threats at your peril, as this flying foul-mouth will up the threat level progressively until it hunts you down while you sleep. Or worse! Ugh!

Over 330 million Duolingo hostages have been taken and this overly obtuse owl has trapped them in the depths of Stockholm Syndrome. They have grown dependent and are unable to live without the threats and insults that gives them a reason to check their phone. And so, their only outlet is to create memes to journal their night terrors and stories of bedroom intrusions.

No man, woman or child is safe if they don’t complete their tasks by the stroke of midnight. But instead of turning into a pumpkin, this pterodactyl-like predator will turn into a psychopathic phonetic nightmare that you’ll love to hate.

Scroll down for the best Duolingo Memes that’s escaped the grips of this Wicked Winged Warlock. 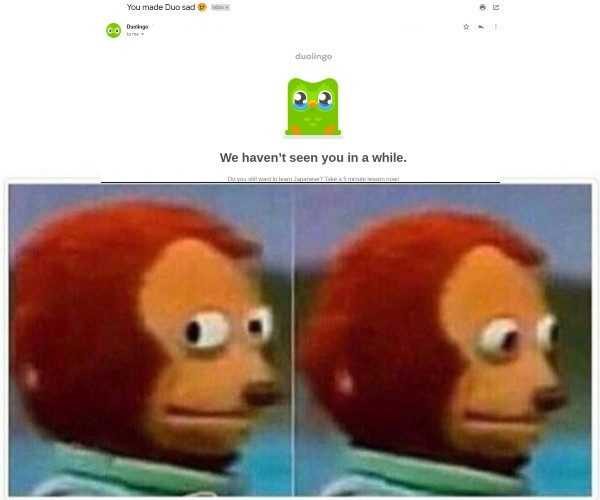 No they won’t, but I don’t want to take them either. Duo is going to be in your face, no matter what you select. Duo doesn’t have time for your sorries or laziness. Say “My sisters are funny” in French again. Do it.

There seems to be a message hidden here. Now you’re going to learn a new phrase: “I need to go to the hospital.”

Duo has had it! Don’t feel like doing your lesson? Duo has something for you! I wonder if Duo is trying to tell me something.