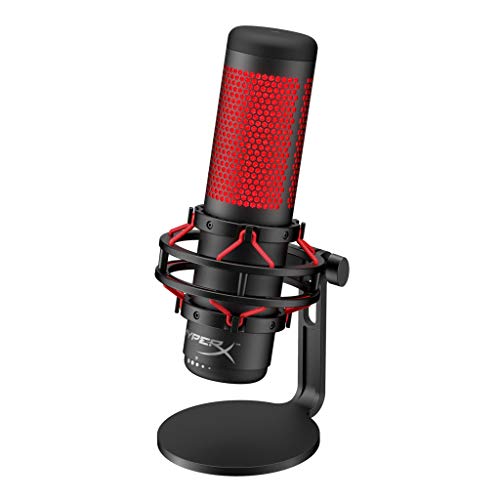 aming peripherals have had one hell of a renaissance with the growing popularity of streaming. While it is true that most gamer-centric accessories bear some sort of obnoxious or 90s-esque extreme branding, the fact of the matter is this segment has matured into its own beast. People want gaming headsets and mics to become the next big thing on Twitch.

However, headset mics just aren’t good enough to keep an audience happy, especially given their penchant to sound a little less-than-professional. As your audience grows, the less you can get away with a crappy system. The answer is to get an actual standalone mic.

Like most USB condenser microphones, the HyperX QuadCast is very easy to set up—and a little difficult to get exactly right. By that I mean: you won’t run into trouble on setup, but you’ll find that your gaming station may end up being a pain to reconfigure so the microphone doesn’t pick up your screaming graphics card when you run Overwatch on Ultra settings. It’s a problem all condenser mics have, so don’t worry too much.

The microphone looks a lot like a hairbrush sans-bristles, and it’s held up on a tilting stand with a rather robust dual-shock mount. On the bottom of the capsule is a gain dial to increase or decrease the sensitivity, and on the back is a knob to swap your pickup pattern. If you don’t know what to do with it, we can help you out below. When you first plug in the microphone, both the sound output and the microphone input will default to the QuadCast on your computer. That’s because there’s a 3.5mm headphone jack on the back of the unit that you can pass your computer’s output through. You’ll probably want to use your own setup, but the option exists if you want it

If you’re living with family or roommates, a dedicated mute touchpad on the top is a godsend. Just tap to toggle the mute function, that’s it. Additionally, the microphone has lighting behind the grill—so you’ll never speak on a hot mic without getting an ultra-visible reminder that you’re live to the world.

You do not need a pop filter with the HyperX QuadCast. There’s a foam-like material immediately beyond the grill that does a decent job of breaking up the pressure spikes associated with plosive sounds (p, pf, etc.) that can damage more delicate mics and make you a real nuisance in a Zoom or Teams meeting.

Even if you’re not streaming, wanting a better microphone to play with is only natural. The HyperX QuadCast is compatible with PS4, PC, and Mac systems via the USB cable.For most systems, the drivers will auto-install once you plug the unit in. You also do not have to use the type-A to type-C USB cable included in the box, but it’s definitely the most convenient

Just like any product, there’s no one best set of settings, but there are a few best practices you should follow with any standalone mic. For example, condenser microphones don’t need a dedicated interface to work. They are much more sensitive to sound than, say, dynamic microphones like the Shure SM58—so they’ll pick up just about everything around you.

In that case, you’re going to want to turn down the gain as much as you can while still being heard. You’ll also want to bring the microphone closer to you and away from anything that could reflect sound back towards the microphone to avoid echoes.

But what about the polar pattern knob on the back? For podcasting or streaming purposes: stick with the cardioid (heart-shaped) pattern. The reason for this is that this pickup pattern will be the best-suited to recording a person speaking while minimizing the noise and echoes of the room around them. By sticking with the cardioid pattern, you’re preventing echoes from your computer monitor or office wall from reaching the mic as much as can be reasonably expected by a feature such as this.

The HyperX QuadCast is definitely worth the money if you want a solid microphone for the computer that sounds great without too much fuss. If that’s a little steep, the HyperX SoloCast might be more your speed—it doesn’t offer nearly as many features, but it’s less than half the price, simple, and great for talking over Zoom.

Of course, investing in a proper setup and room treatment will net you better results, but the QuadCast represents a point of diminishing returns. We strongly recommend this product for streamers, podcasters, and anyone that wants a step up in mic quality, but can’t commit to a dedicated recording station.