20 Unbelievable Photos That Are Both Insane And Horrifying


20 Unbelievable Photos That Are Both Insane And Horrifying 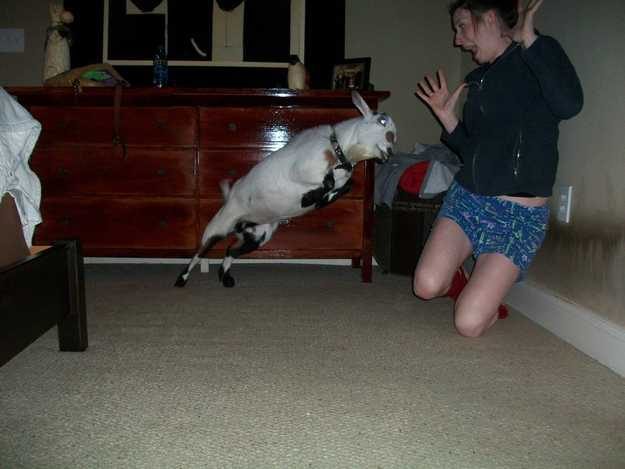 Here’s the thing…goats don’t make for great pets. In fact, there horns have been known to cause some serious damage if they hit you with enough force. Sadly, this young woman found out the hard way…don’t mess with the goat.

19. Bears Are Not Your Friends 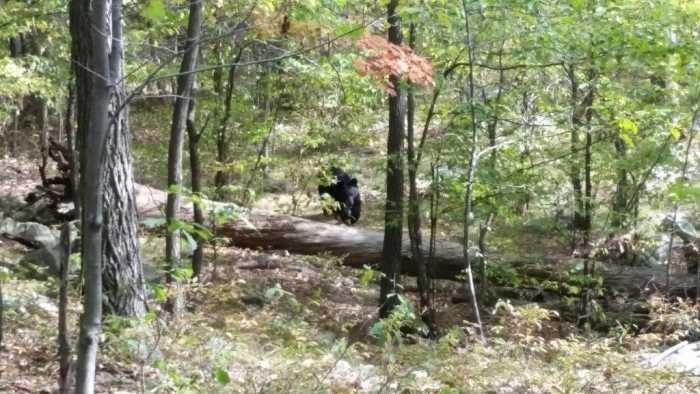 It’s important to remember that when you’re hiking in the woods, it’s wild territory. And when it comes to bears, you better believe they are at the top of the food chain. This unfortunate hiker snapped this photo of a black bear prior to it attacking. Honestly, we wouldn’t be sticking around for a photo op. 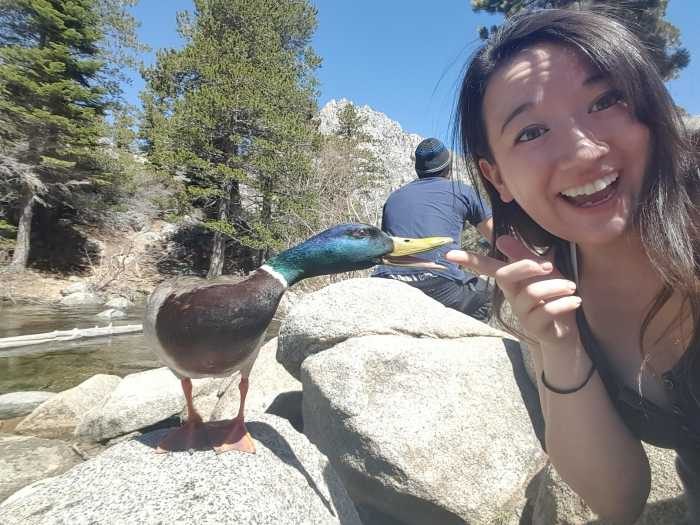 Ducks are known for their sweet demeanor, but get too close and well…this girl learned the hard way they have quite the bite. Yes, this duck tried to take a chunk out of her nose after this photo was taken. 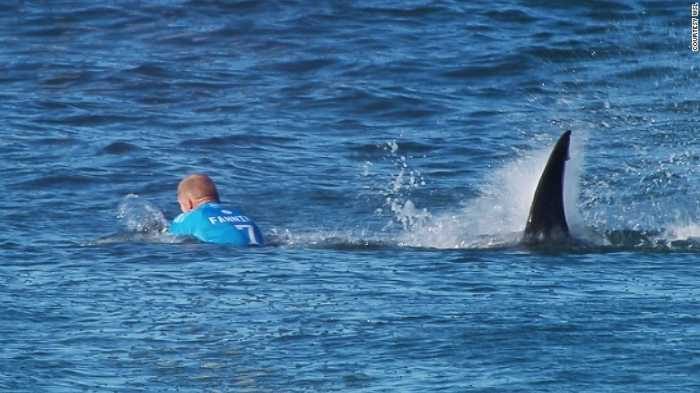 Surfer Mick Fanning was competing in a surfing competition when unbeknownst to him a shark decided to sneak into his territory. After this photo was taken, the shark attacked. Thankfully, Fanning was able to get away and onto a coast guard boat in time. Too close to call, we say. 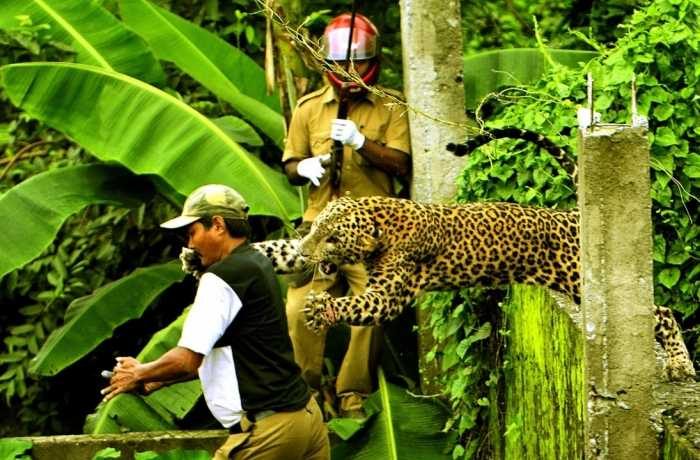 This worker was attempting to bring this jaguar back into the sanctuary where it was being kept. Unfortunately, the jaguar had other plans and attacked the unsuspecting worker. Attempts were made to tranquilize the animal, but in the end it had to be euthanized. 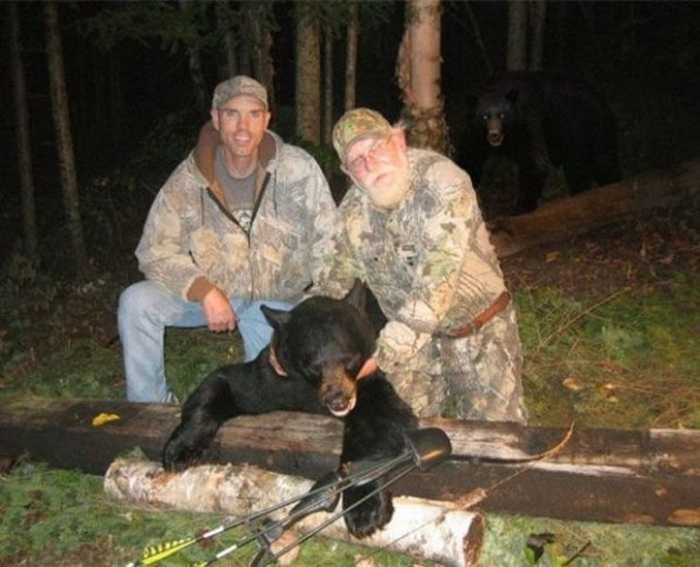 You may not realize it, but hunters put their lives on the line whenever they go out searching for big game. This unfortunate duo has no idea that an angry black bear is out for revenge after the death of a fellow bear. While the hunters got away, it could have ended quite differently. 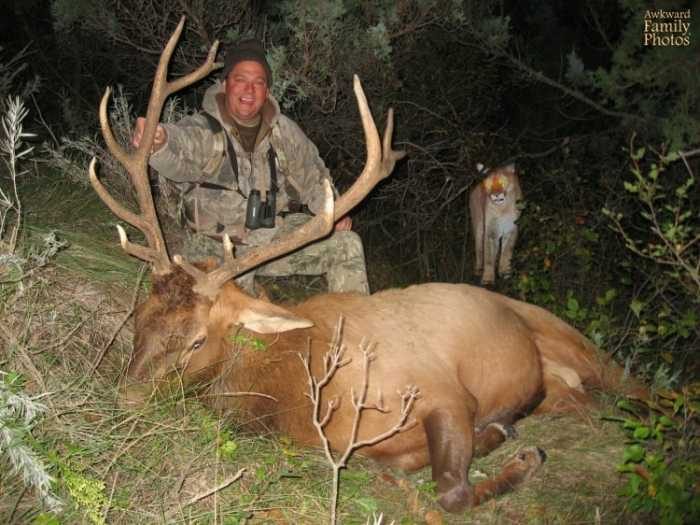 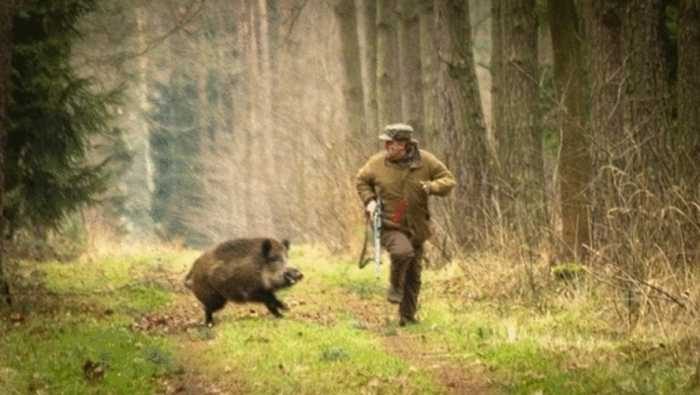 Wild boars are NOT sweet and cuddly pigs. They are known for attacking hunters and can be very aggressive. You won’t believe how much damage they can do with their tusks. This hunter found out the hard way. You better RUN, sir. 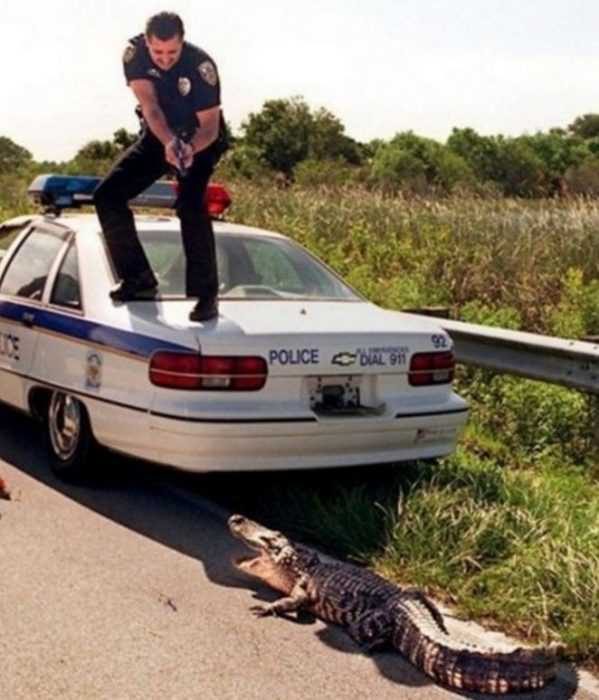 You may think this photo is funny, but the truth is alligators can be quite dangerous if they go on the offense. This cop was placed in quite the precarious position because the hide of an alligator is quite thick and bullets could struggle to penetrate the hide. 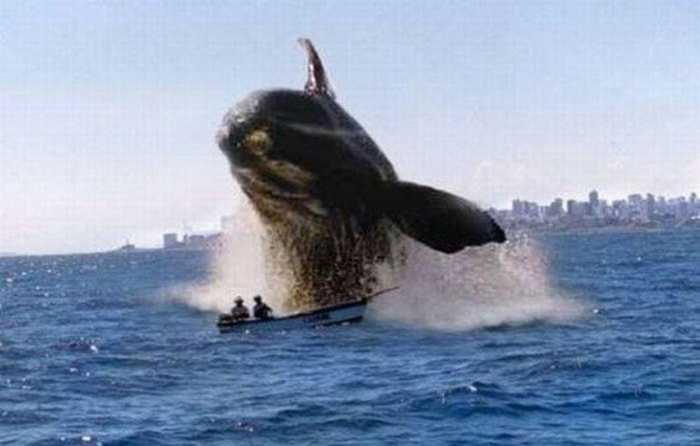 Whale watching is one of the more popular tourist attractions nowadays, but it does come with its own fair share of danger. This whale decided to breach right next to this fishing vessel and landed right on top of it. While the men on the boat escaped unscathed, the boat was pretty much a goner. 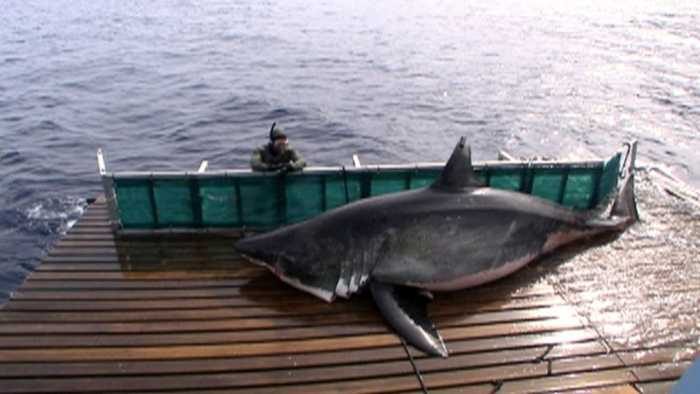 Sadly, when you play with sharks sometimes you end up bit. When this documentary crew for Shark Men chummed the water, a large shark attacked and ripped off one of the legs of the crew. He ended up dying from blood loss in a very tragic state of affairs. 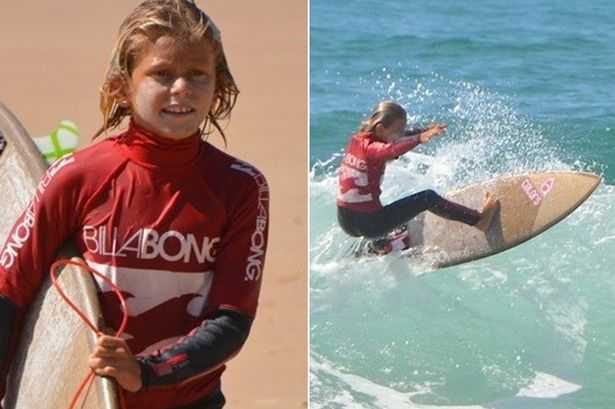 This photo of young Elio Canestri was taken moments before a shark grabbed him off his board. At the young age of 13, Elio was a rising star in the surfing spectrum, but that day he chose to surf in an off-limits area. The shark bit him on the stomach and ripped both of his arms off before a rescue boat arrived. He died at the scene.

8. Don’t Fight With Your Husband

In this horrific surveillance footage, a woman gets in a fight with her husband when driving through a wild life preserve. She gets out of the car, only to be dragged away by a tiger. The mother-in-law immediately rushes to her aid, but is killed by the large predator. 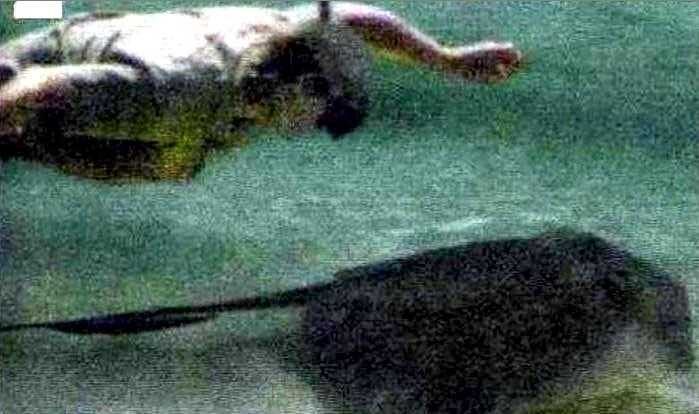 This is the last photo of Steve Irwin alive before his tragic death when he was killed by a sting ray. The beloved Crocodile Hunter had been filming a new special when a spooked sting ray struck him in the chest and the barb pierced his heart. 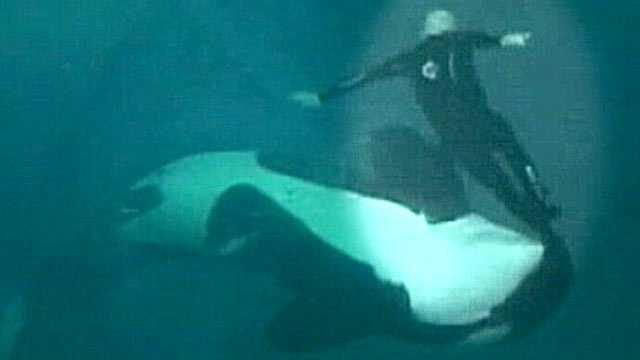 Tilikum the whale caused two deaths and a variety of other injuries when he was alive at Sea World. This photo shows the whale dragging a trainer under the water, refusing to let go. Another trainer tragically died in the same manner.

5. What Happens in Vegas…is Deadly 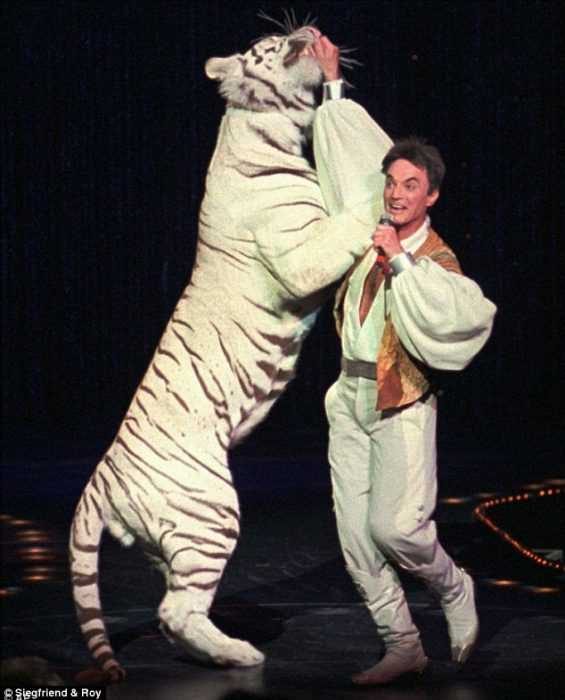 Siegfried and Roy are best known for their magic act in Las Vegas and the white tigers are the highlight of the event. Unfortunately, this tiger would go on to maul Roy, leaving him partially paralyzed and with scars he will keep with him forever. 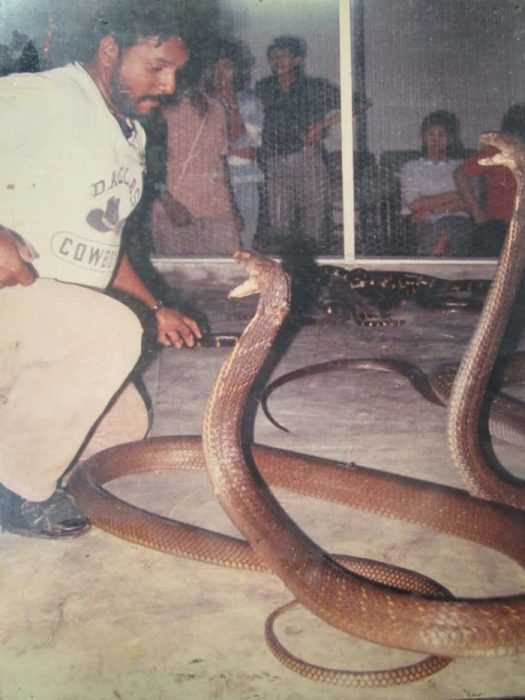 In this photo snapped before a snake charming act goes completely wrong, infamous charmer Ali Khan Samsudin was performing with a cobra as usual. Unfortunately, this cobra decided to attack the man, fatally poisoning him. Talk about high-risk employment.

3. Close Encounters of the Lion Kind 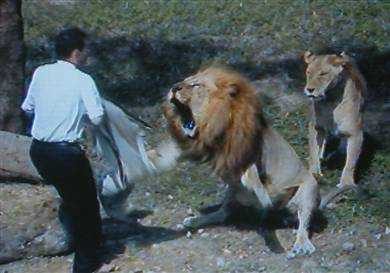 While lions are majestic creatures, they are best observed not interacted with. Unfortunately, this man decided to get a little too close and this lion brutally attacks him after this photo.

2. Elephants Aren’t All That Friendly 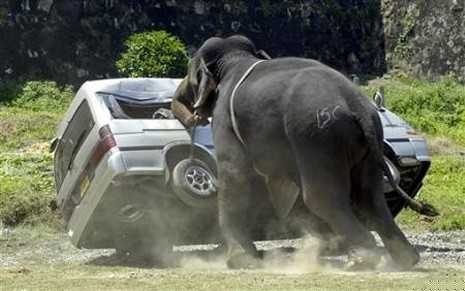 Elephants are usually seen as gentle creatures, but believe us when we say they have a mean streak. As you can see, this safari vehicle got in the way of this elephant and he ain’t having it!

1. The Running of the Bulls 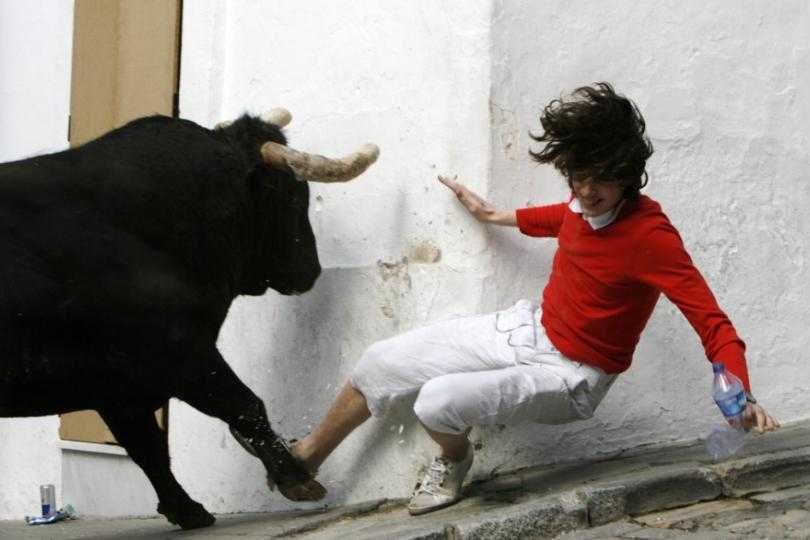 This photo depicts a runner just moments away from being gorged by a bull during the Running of the Bulls festival in Spain. A popular event, it can also end quite badly for the humans involved.