A group of tourists got the thrill of a lifetime when they happened to come across a group of giant whales. Seeing one whale on a boat excursion is pretty miraculous, but coming across an entire pod is unbelievable. However, tourists were completely blown away when one of the giant whales jumped out of the water and demanded a kiss! Silver Shark Adventures is a boat tour agency that gives tourists the opportunity to closely gaze upon aquatic life. The boats head out into the ocean and bring tourists to areas that are often populated by whales and more! 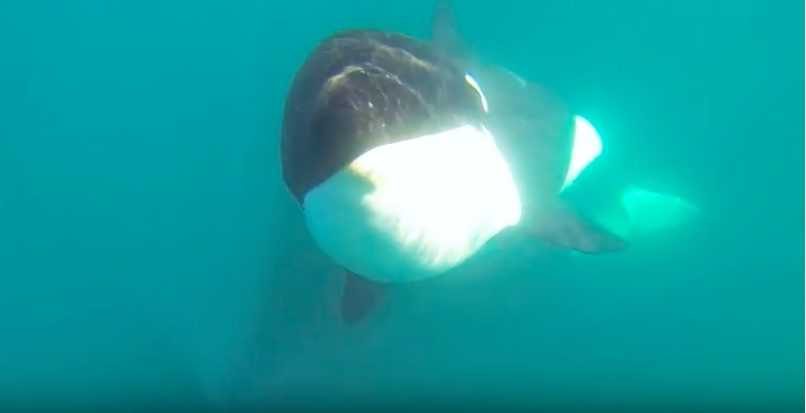 Owner, Charles Harmer, and his friend Mike Nulty have gone out into the waters several times each day. These two have seen just about everything that you can see in the ocean. That’s why when they saw a huge pod of whales behaving in a unique manner they called the experience ‘once in a lifetime.’ 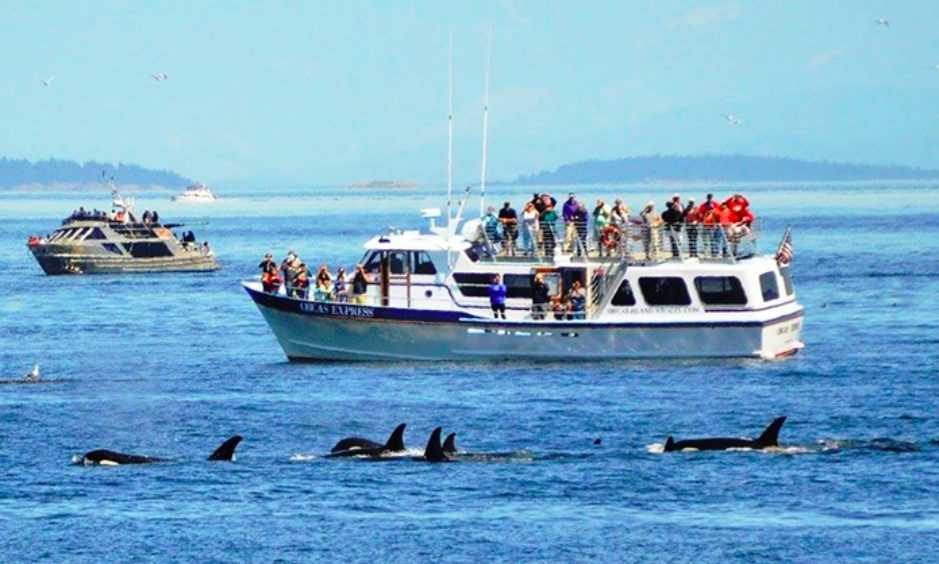 Charles and Mike had packed up a boat with 12 tourists. They headed off into the ocean waters to show the tourists some of the beautiful whales that congregate in the area. However, they had no idea that this trip would be one of their most memorable. 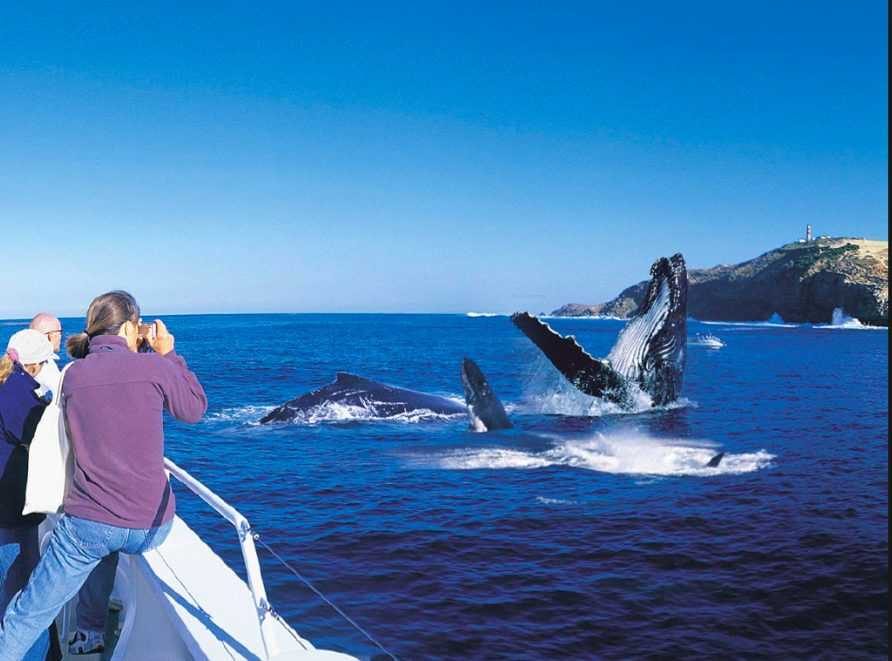 The boat filled with tourists was deep in the ocean when everyone caught sight of something in the distance. Charles and Mike could tell that it was a pod of giant whales. However, they had never seen one so big and so close-by. 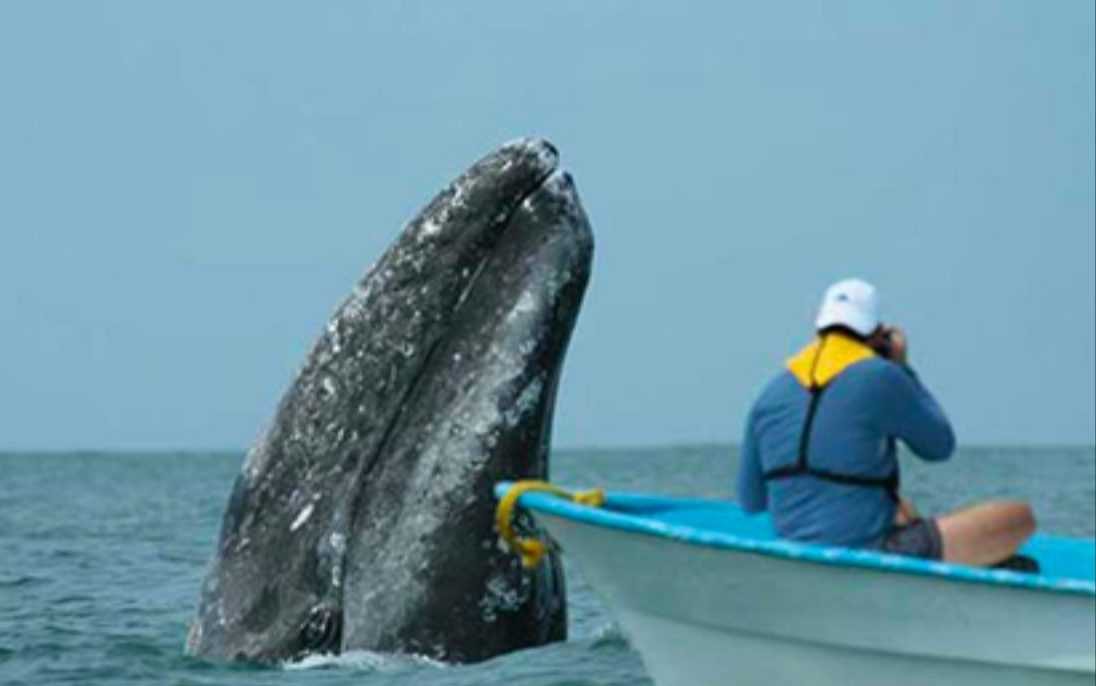 The pod of giant whales began to move closer and closer to the tour boat. The boat was off Guerrero Negro in Baja California Sur, Mexico. This area is known to house a lot of giant whales and fish. 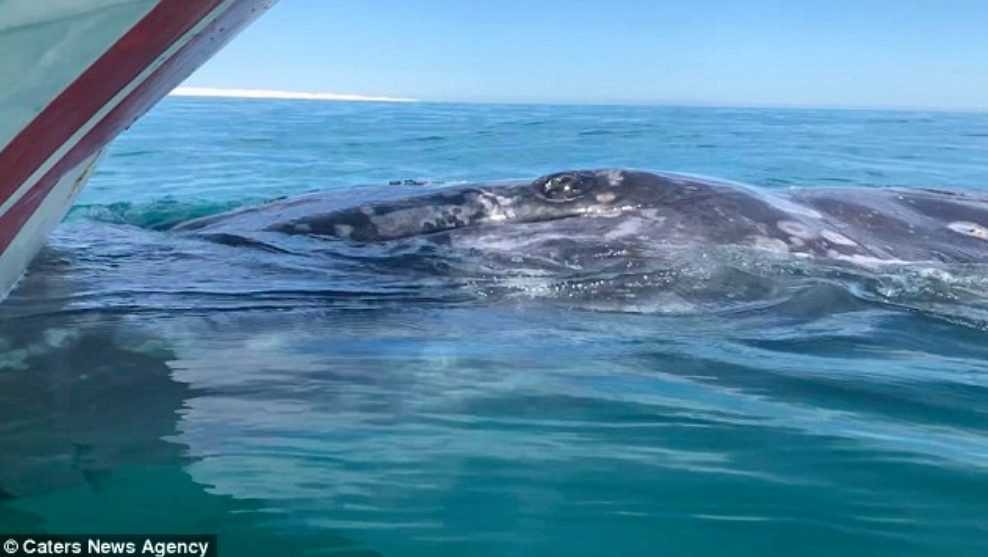 Eventually, the whales were so close that they were right next to the boat. The tourists on the boat were blown away by what was happening. Charles and Mike quickly began to film the interaction. 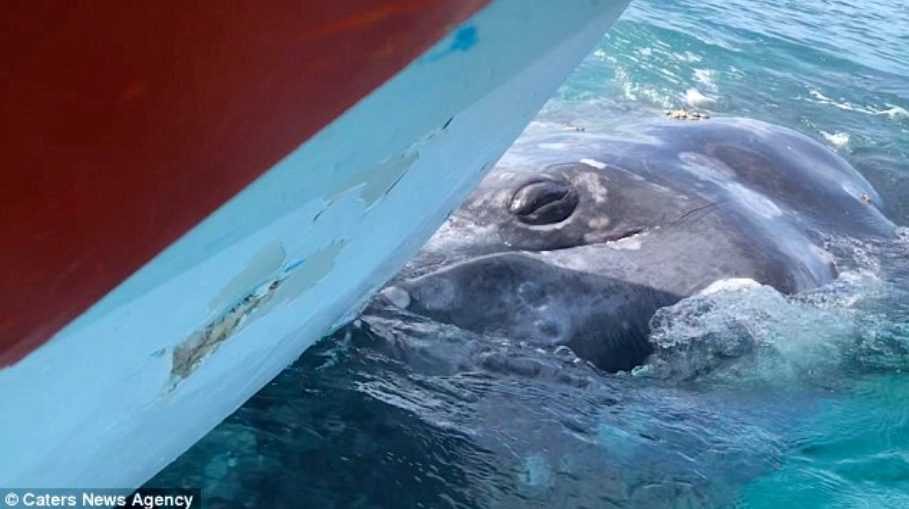 The tourists were shocked by what they were seeing. “It’s still there, it’s actually following the boat. It’s trying to push us,” one tourist says in the video footage of the interaction. Then, the whales did something truly unbelievable… 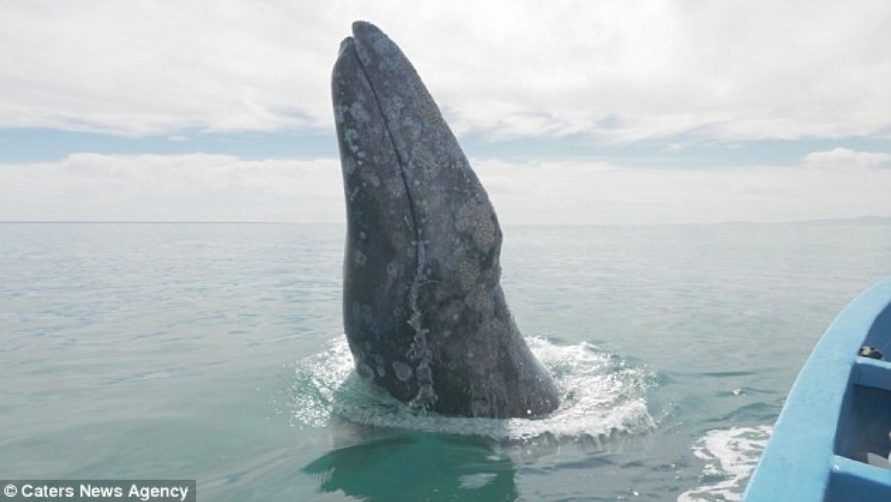 Soon, the whales decided to do something unbelievable. They began to slowly rise out of the water and it seemed like they wanted the tourists to play with them! It was obvious that they wanted to be pet. 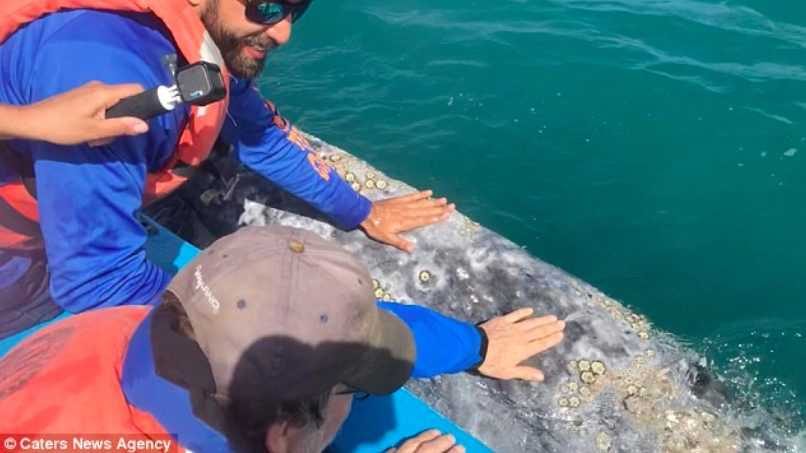 So what did the tourists decide to do as the giant whales rose out of the water? Well, they knew they had to seize this amazing opportunity to pet a giant whale. Then, one of the whales demanded something even more extraordinary. 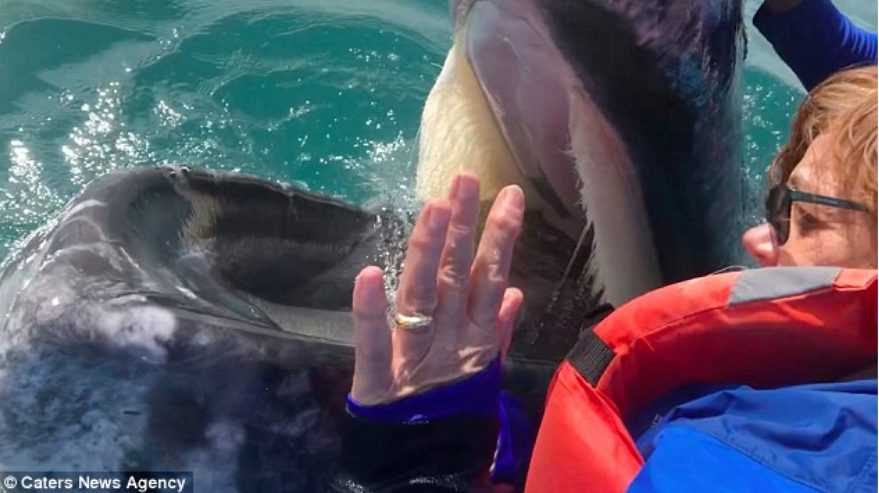 Eventually, one of the whales made it obvious that he was looking for a little bit more than a hug. So one of the tourists leaned over a gave the whale a sweet kiss! The tourists and the whales were both excited to be around each other. 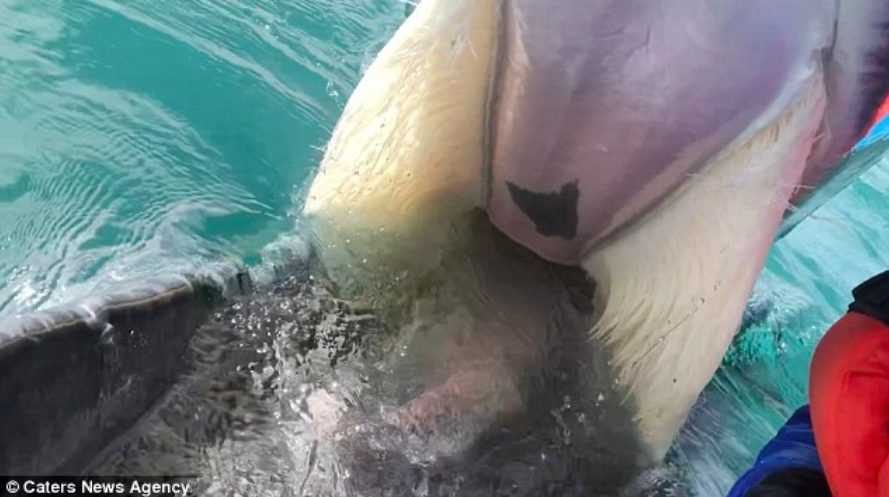 The whales continued to splash around and the visitors grow even more excited. At one point, one of the whales opened its mouth wide so that the visitors could peer inside. Everyone couldn’t believe their eyes. Charles and Mike only recently uploaded the video footage of the encounter onto the Internet. They hope that the video will give people an interesting perspective into the habits and behaviors of giant whales. However, Charles did speak out about interacting with the whales in such a way. In most normal occasions, touching a whale and petting it wouldn’t be the smartest idea. However, Charles has stated that he wouldn’t encourage his passengers to do so if he thought that the whales didn’t like it. Charles believes that the animals genuinely enjoy the encounter. 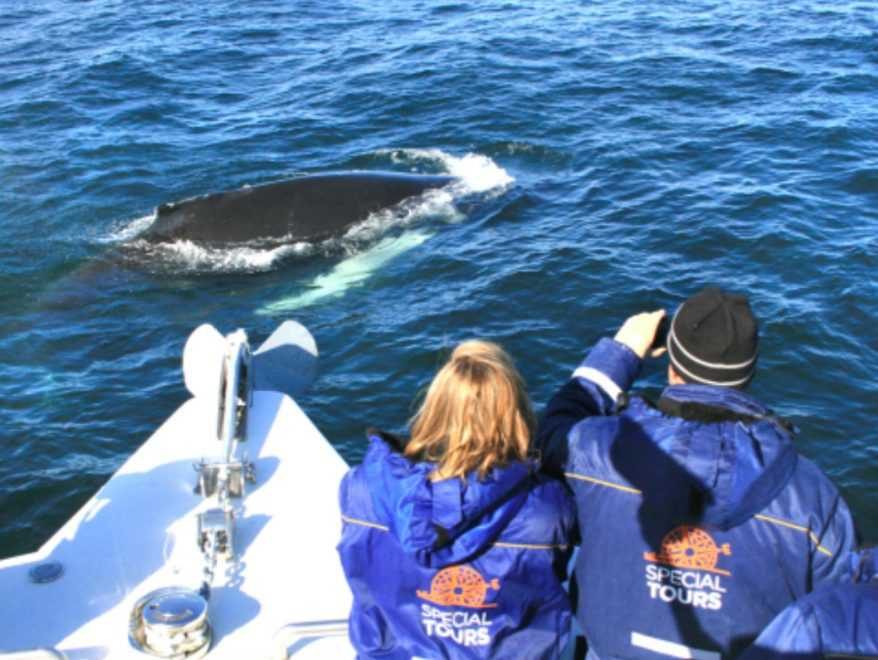 “Regarding the science and behaviour as to why may these whales display such behaviours, I believe they, like humans, are mammals and animals. They clearly enjoy the feeling of being touched and tend to feed off of the emotions of people,” Charles explained. “I personally have spent much time with the grey whales in these lagoons during the previous 10 years, observing their numerous and varied behaviors and nothing they do totally shocks me anymore.” Charles states that on the day of the encounter, there were 3 to 4 whales that were interacting with the group. 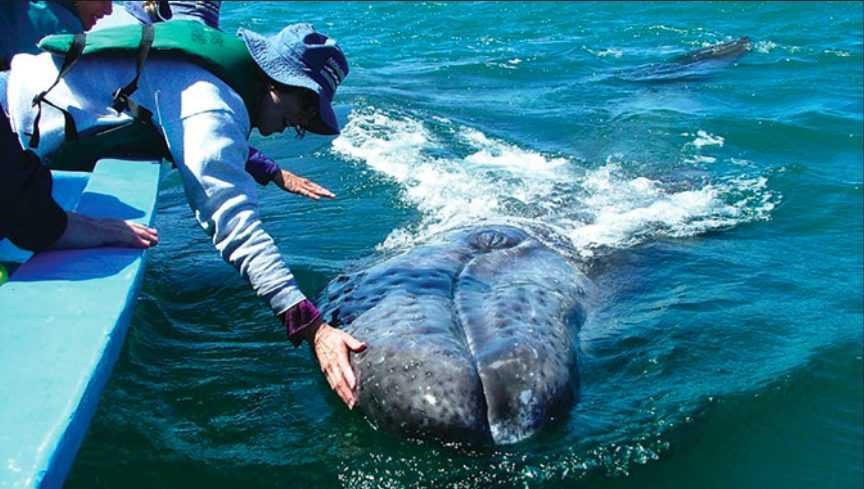 Although there were 3 to 4 whales interacting with the group, Charles noticed that the most playful one was the mother. In fact, in the video footage it is the mother that you see most frequently. Charles is so grateful to have been there to witness such an amazing encounter. Since Charles is the owner of the boat tour agency, he says that he is always expecting the unexpected. Being able to interact with such majestic creatures is a wonderful honor that Charles doesn’t take lightly. 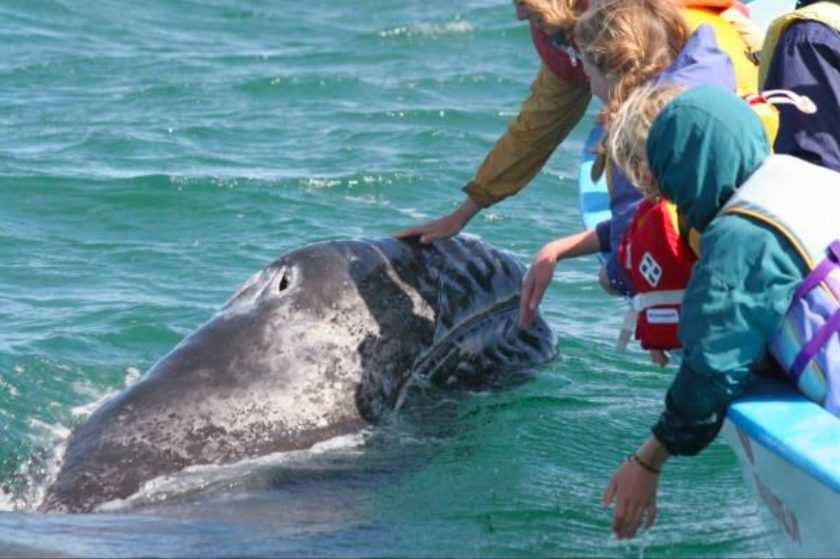 “This type of encounter and experience is definitely a once-in-a-lifetime. There is nowhere else on the planet where one can experience something of this nature,” Charles stated. He then went on to explain how he wishes that everyone could experience this. 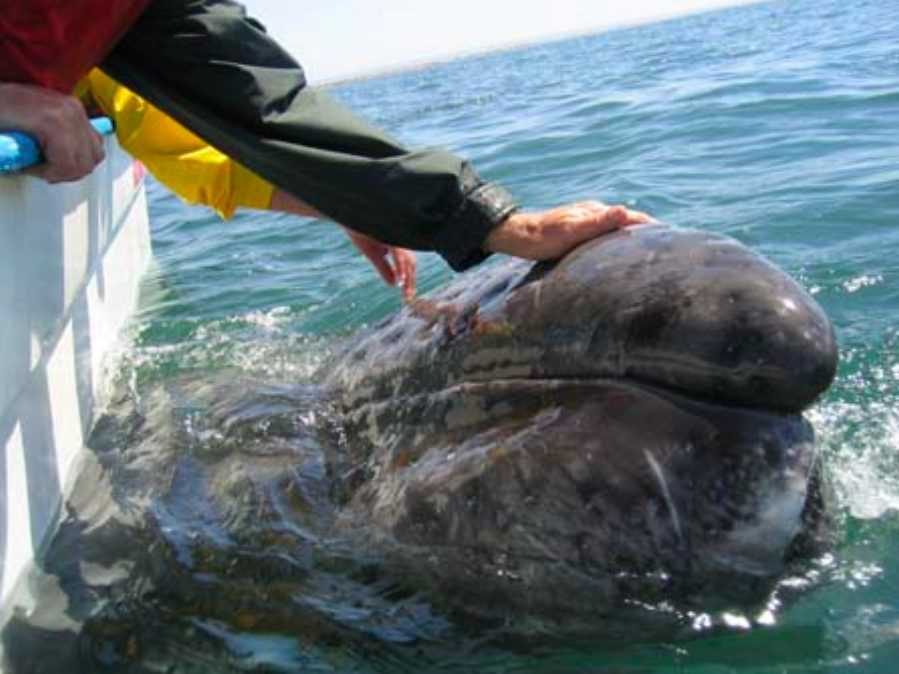 “Touching whales where the whales are the ones initiating the contact: it’s something I wish everybody could experience. I believe an experience like this would drastically change the minds of so many. It truly doesn’t get much better than this!” All of the twelve passengers on the boat ride will forever remember this amazing experience. Being able to both pet and kiss a giant whale is not something you’ll ever easily forget!