What would your reaction be if you were brought to freedom after having your home taken away from you?  We can only imagine that you’d be pretty ecstatic. Well, that’s the exact reaction that one rescued ape had when he was brought to freedom. You’ll crack up when you see this ape’s reaction to freedom! Gibbons are apes that live in tropical and subtropical rainforests from eastern Bangladesh and northeast India to southern China and Indonesia. They happen to be quite acrobatic mammals as they love to swing around from tree to tree. There are over a dozen recognized species of gibbons. Although there are many gibbon species, the unfortunate reality is that almost all except one species of gibbon is endangered. But why are these apes at such a high risk of extinction? 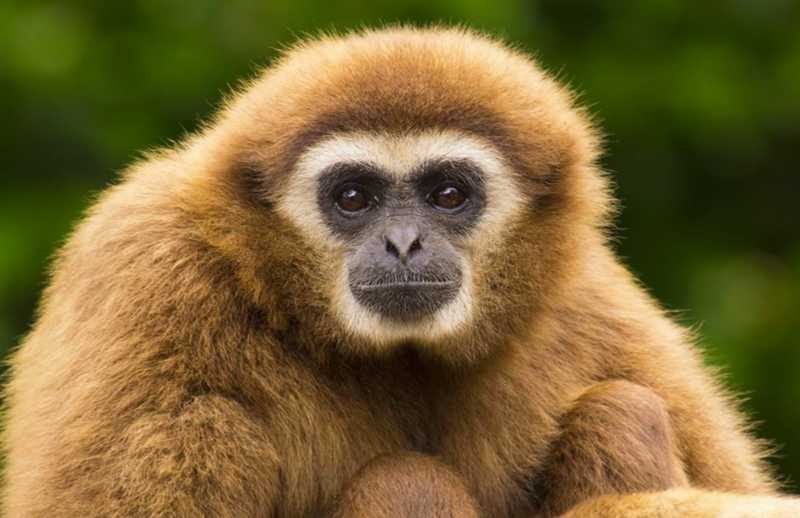 Gibbons are a highly endangered species and this is due to a variety of contributing factors. Poachers hunt down gibbons and sell them off in illegal trades. Also, much of their land has been taken away from them. Throughout the years, the number of gibbons has continued to dwindle more and more. Poachers will often follow the gibbon’s territorial call straight into their location. Due to these dwindling numbers, many organizations have begun to help out the crisis. 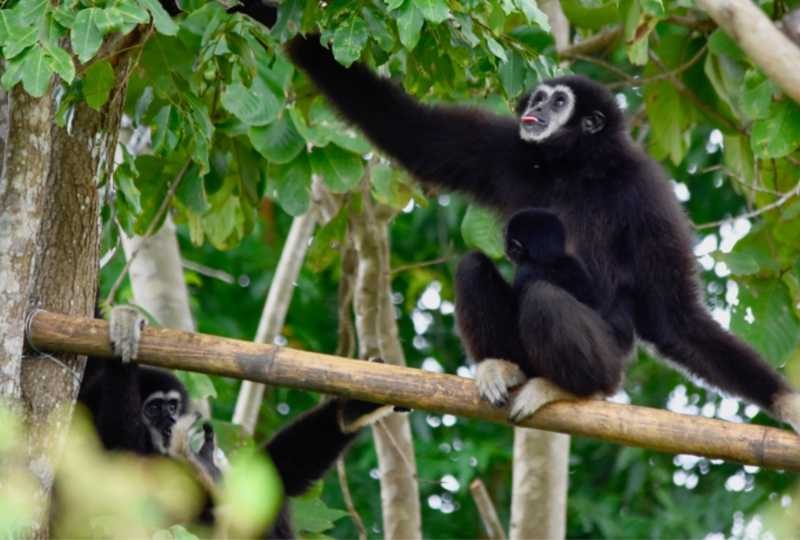 The Wildlife Friends Foundation in Thailand has recently been able to give a family of four white-handed gibbons a second chance at life. The non-profit organization has been working extremely hard to recreate a natural environment for many of the gibbons that they rescue. 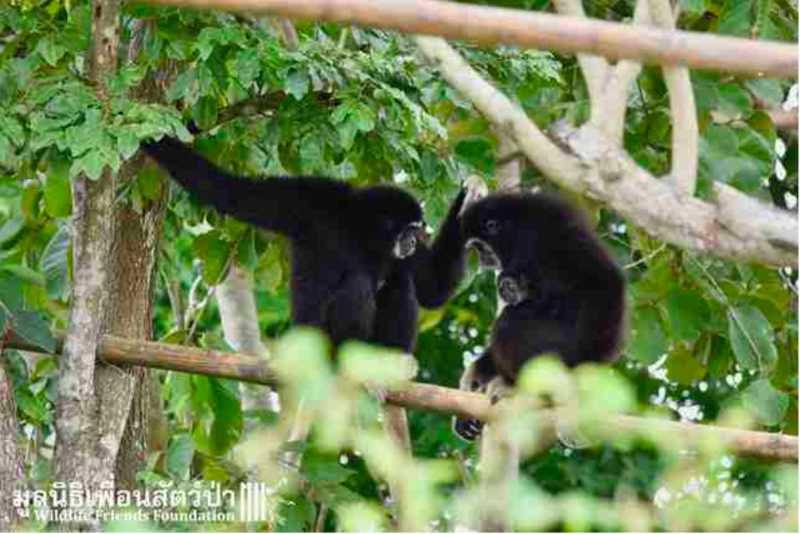 The gibbons that the organization was able to rescue was 19-year-old male Dome and Bam, a 17-year-old gibbon. The pair were being kept illegally as pets in Bangkok before they were rescued. The pair has also begun to parent two others gibbons, four-year-old Bowie and Stardust. 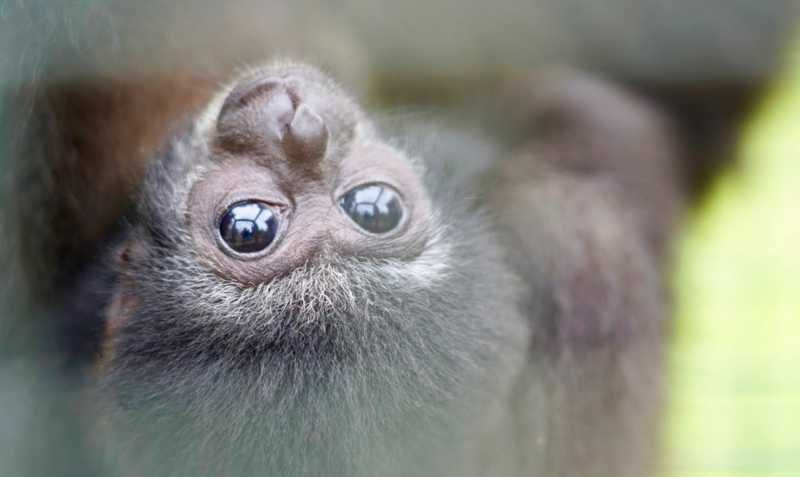 Since they had all been living in such a small space before, the organization felt that it would only be right to give the space that they deserved. After all, gibbons are meant to live in large areas with lush greenery all around them. So that’s exactly what the organization wanted to provide for them. 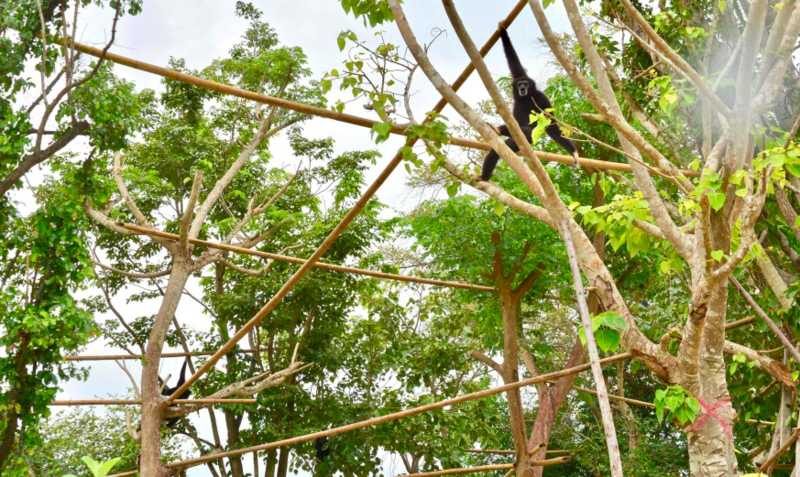 Finally, the organization realized that they could create the perfect habitat for the gibbons on a private nearby island. They filled the greenery up with a bamboo jungle gym, rope swings and barrels. This would give them all a lot to play and interact with. Image: flight of the gibbon

“Our enrichment team supplements the treetops with large barrels for shelter as well as bamboo and ropes to create an elaborate jungle gym,” rescuers said. “For this particular island, elephant volunteers spent several days clearing the moat of weeds and debris. Because gibbons are afraid of water and unable to swim, it is important that the moat remain clear so they do not mistakenly try to walk across.” 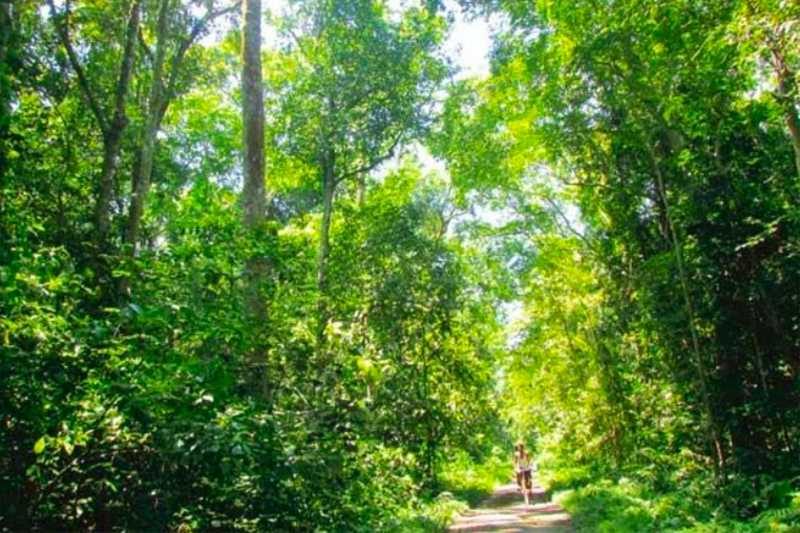 Finally the day had come for the gibbons to be brought to their new home. One of the rescuers quickly gathered them up and placed them in a transport cage. Then the rescuer began to bring them over to the island. 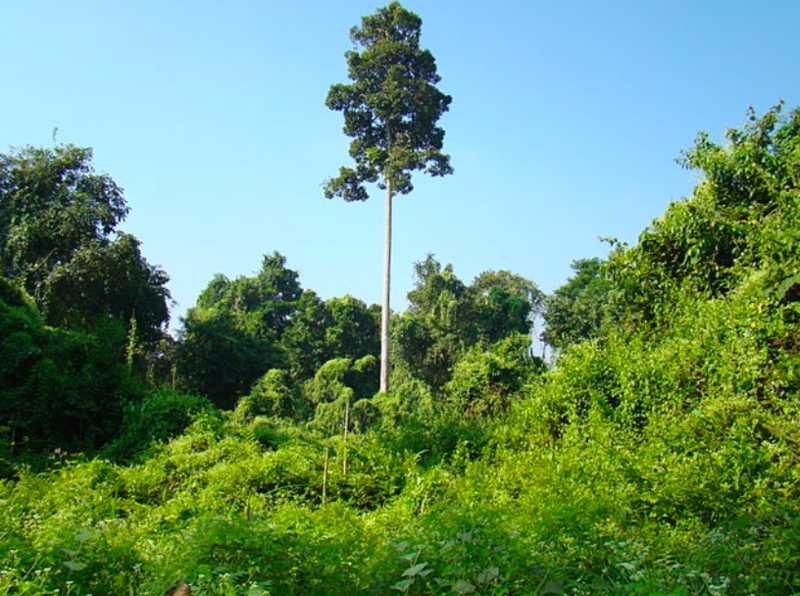 As the rescuer began to get closer and closer, the gibbons began to grow more and more impatient. They could see that there was a lot of greener ahead of them and they seemed to be excited to explore it! Finally, they reached the shore. 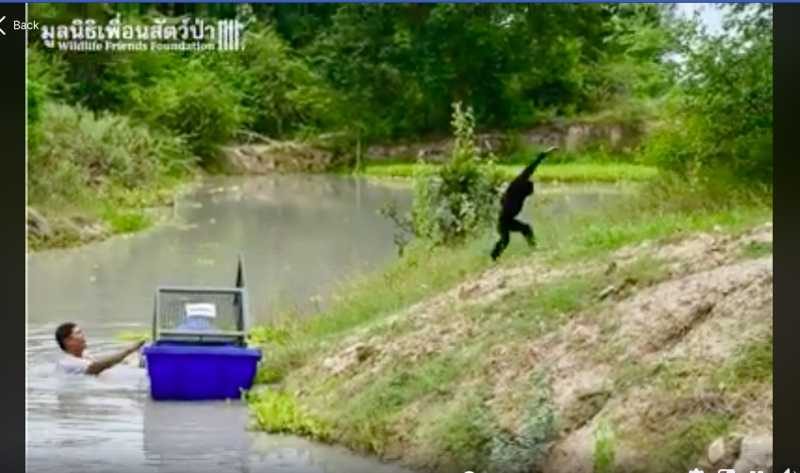 Once they reached the shore, the rescuer open the door of the cage. One of the white-handed gibbons quickly jumps out and begins to run out toward the greenery. Then he did the cutest thing that no one expected! The gibbon was so happy to be out in such a huge piece of land that he just couldn’t contain it. He began to dance around from sheer joy! The rescuers were in awe at the little happy dance the gibbon was performing. It was a heartwarming scene for all of the rescuers involved. They knew at that point that they had managed to make the gibbon happy. After so many years being locked up, the gibbon was finally free. 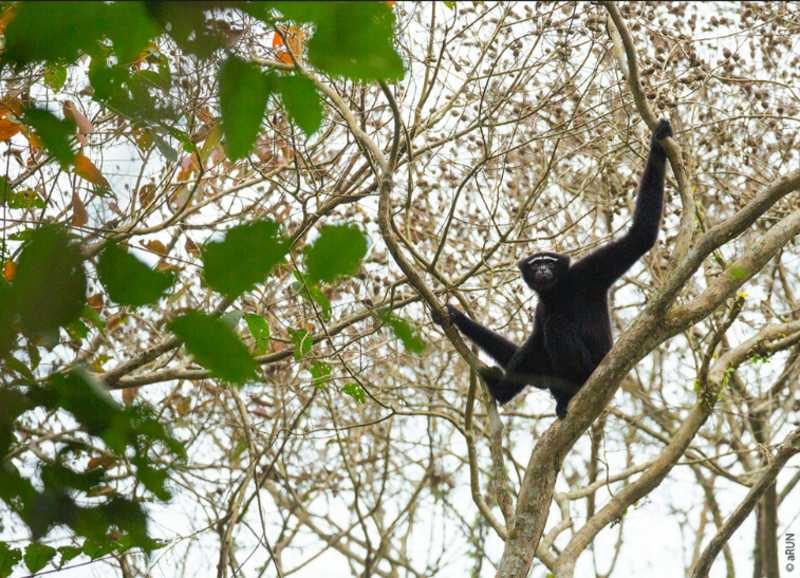 Soon enough the rest of the family was let out onto the island. They all appeared to be just as happy as the first gibbon was. Finally they would have all the space to roam and climb and have fun! 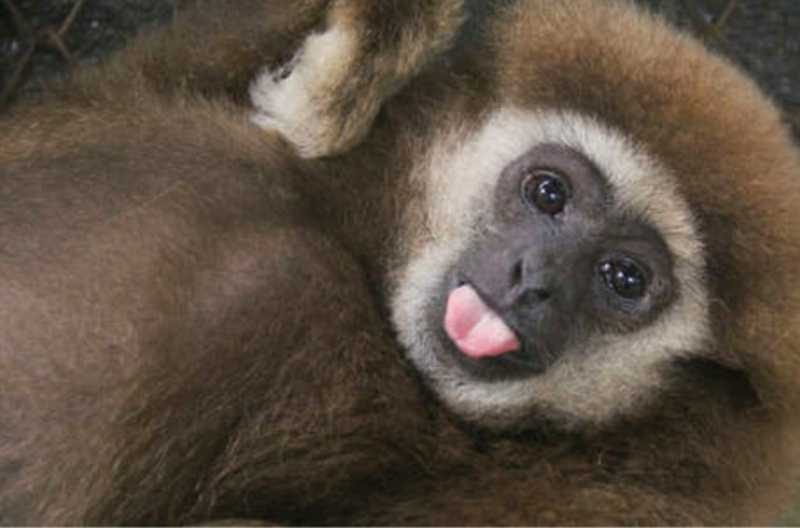 The rescuers are especially happy that the kids will be able to grow up in such a great environment. Unlike their mother and father, they won’t have to know about the struggle of being kept captive. 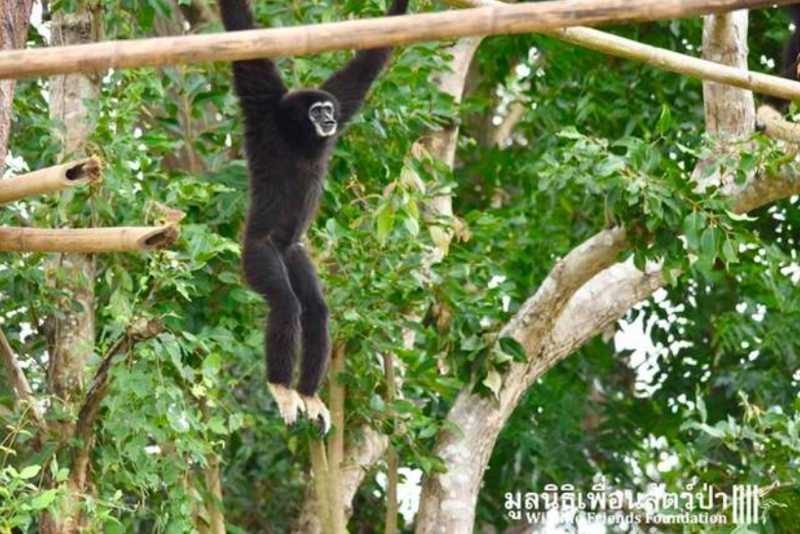 The goal for the gibbons is for them to be able to live on the island permanently and without the interference of humans. Rescuers want the gibbons to be able to successfully live and breed there. However, they will help out however they can. The organization will, however, continue to watch over the gibbons from a distance. Vets will also visit from time to time in order to make sure that the gibbons are staying healthy and eating enough. 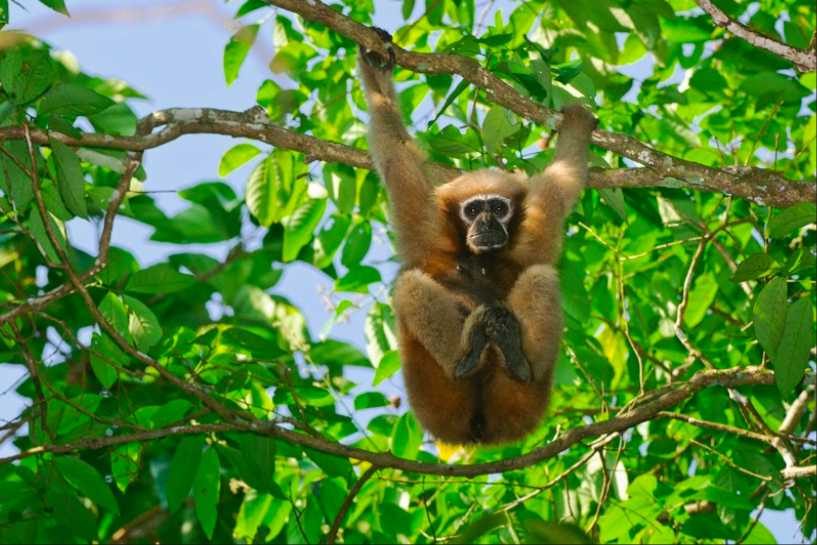