Parys the lion cub is overcoming a rough start in life, all thanks to a sheepdog. The lion was born in a tiny zoo in Wojciechów, Poland. He was almost immediately abandoned. 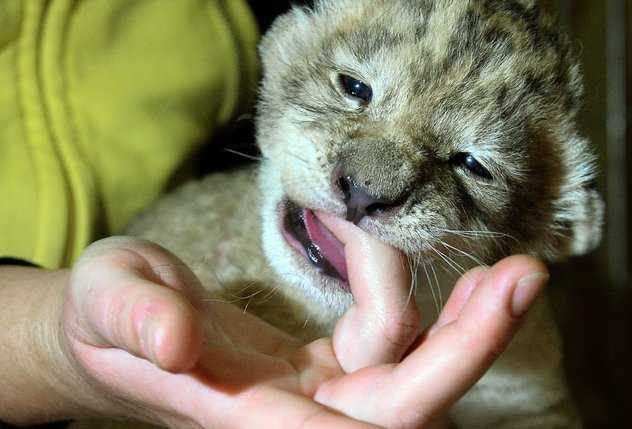 Parys’ mother, Ela, had no interest in nursing him. His father gave him a lick and then went off about his business. The little cub needed socialization and to nurse mother’s milk. Newborn cubs require 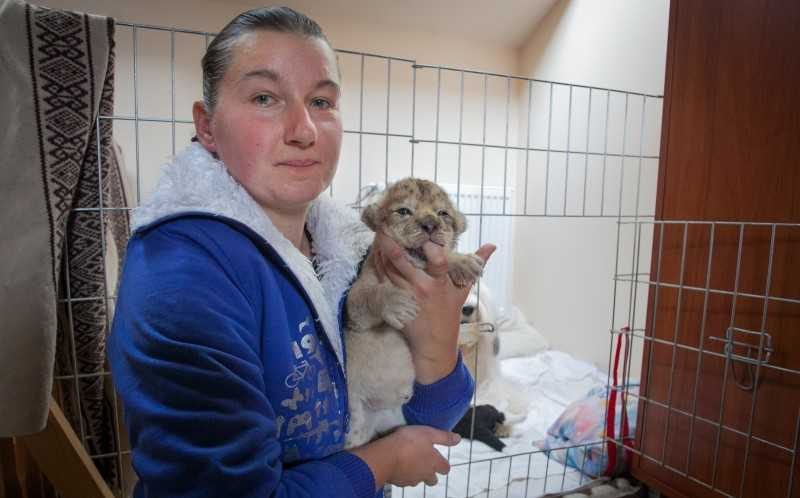 According to zoo owner Krzysztof Zerdzicki, it is not unusual for animals to abandon their young.

“Animals sometimes abandon their young, as do humans from time to time,” he told AFP.  He knew that he couldn’t force the lioness to nurse the cub, but the cub needed help. Nursing milk delivers vital nutrients, so he wondered what his next step would be for the little cub. 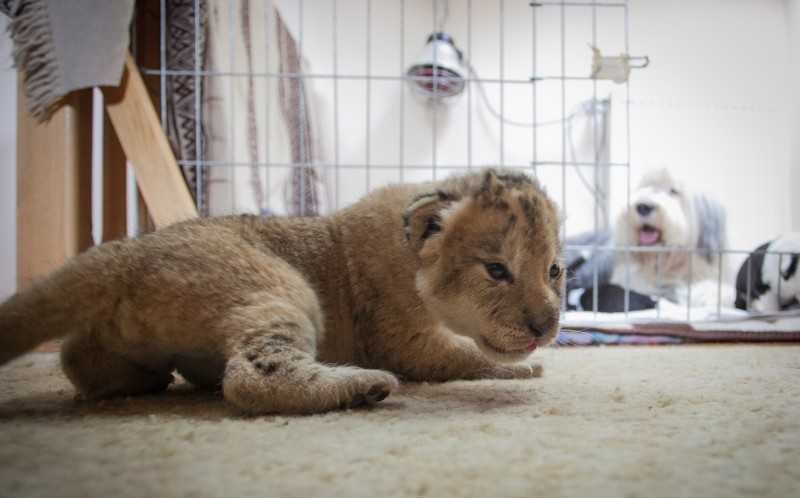 Zerdzicki said he felt the lioness was entrusting her cub to him. “When I picked up the little guy, the lioness came over to me and tapped me with her head as if to say, ‘take care of him.’ And then she left.” 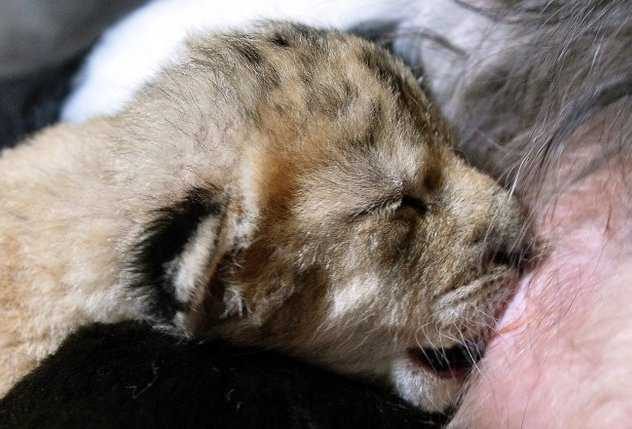 Zerdzicki was unsure about what to do, since baby lions need lots of care, especially since they need milk to grow. Milk contributes to the health of the muscles and skeletons, and just like in human babies, is an important part of growth. 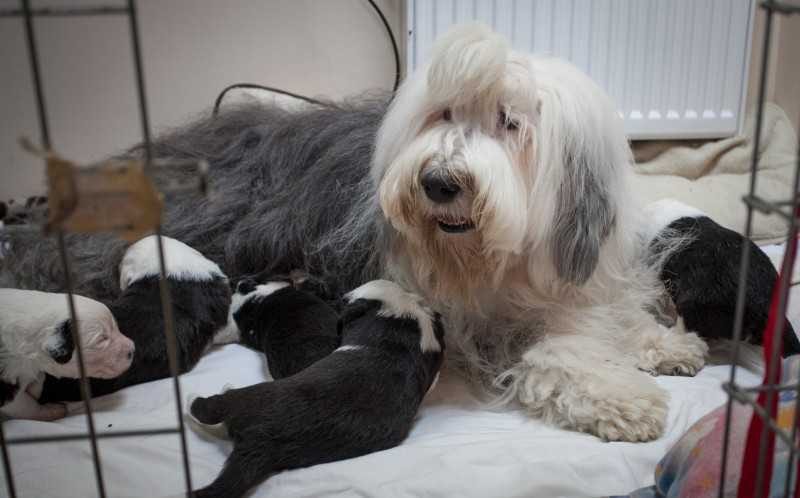 Then he had an idea: his pet dog Carmen, an Old English Sheepdog, had given birth to five pups just a few days before Parys’ arrival. He decided to entrust the lion cub to the sheepdog. It was Carmen’s first litter and she was very loving, so he wondered if the match would work. 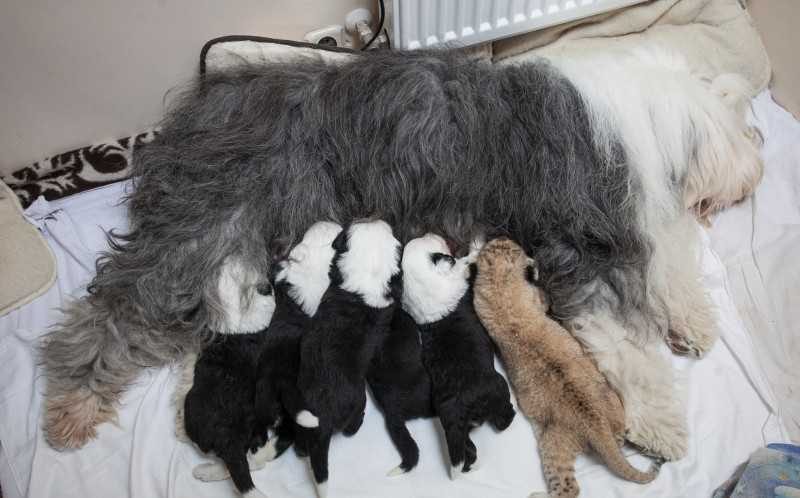 Although Carmen was puzzled by the sudden appearance of a sixth baby, she quickly decided to adopt him as her own. Now that Carmen was on board, would the lion cub latch on or would the zoo have to bottlefeed him? Bottlefeeding is an option but the milk nutrients present in a nursing mother were preferred. 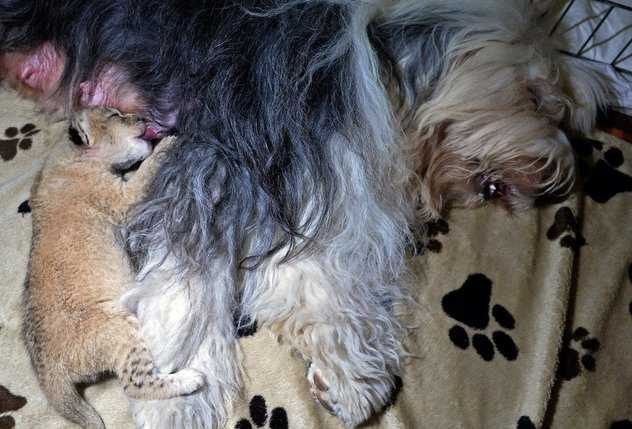 Carmen viewed the little lion as one of her own pups. “She’s been taking care of him, licking him, nursing him. His brothers and sisters have also accepted him as one of their own,” said Zerdzicki. It was a most unusual sight to see the lion and puppies nursing together like a little pack. 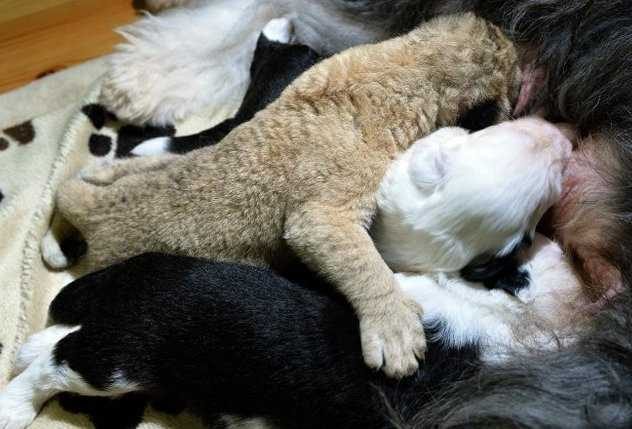 Now Parys hangs out at home with Carmen and his siblings. He cuddles with them and even suckles from Carmen. 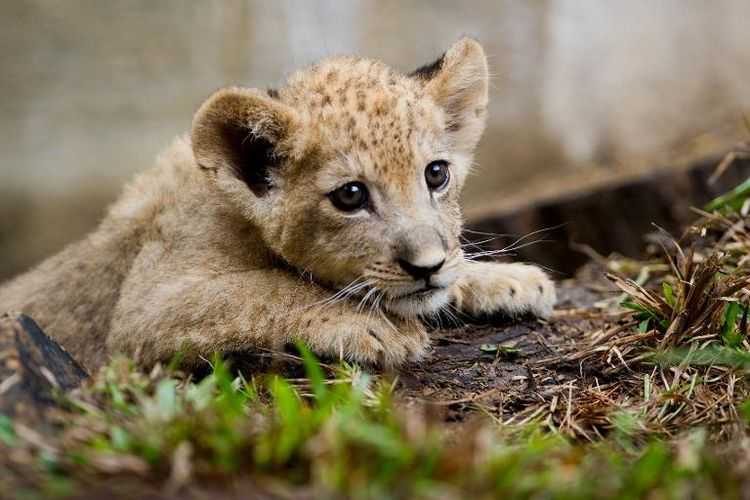 Under Carmen’s care, Parys is thriving. He is gaining weight and enjoys romping with his puppy brothers and sisters. 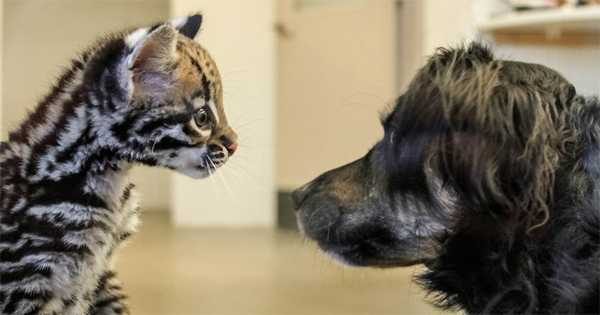 400;”>This is not the first time a dog cared for abandoned animals. The Cincinnati Zoo had a special dog named Blakely who worked in the nursery with newborns. Blakely would work with multiple species including baby cheetahs, lion cubs and even warthogs to teach them how to play and interact. The patient and loving dog “retired” from being a nursemaid in 2017. 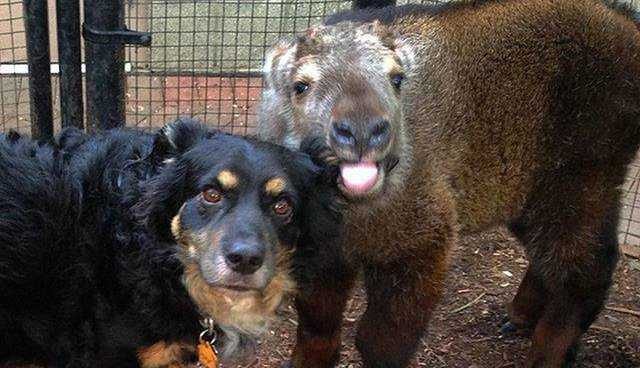 During his time on the zoo staff, Blakely looked after a warthog, an ocelot, cheetahs, foxes and even skunks! Blakely helped the little ones learn things that humans could not, like how to play and when not to bite so hard. It was a great match that helped the animals develop social skills and made for some interesting videos. 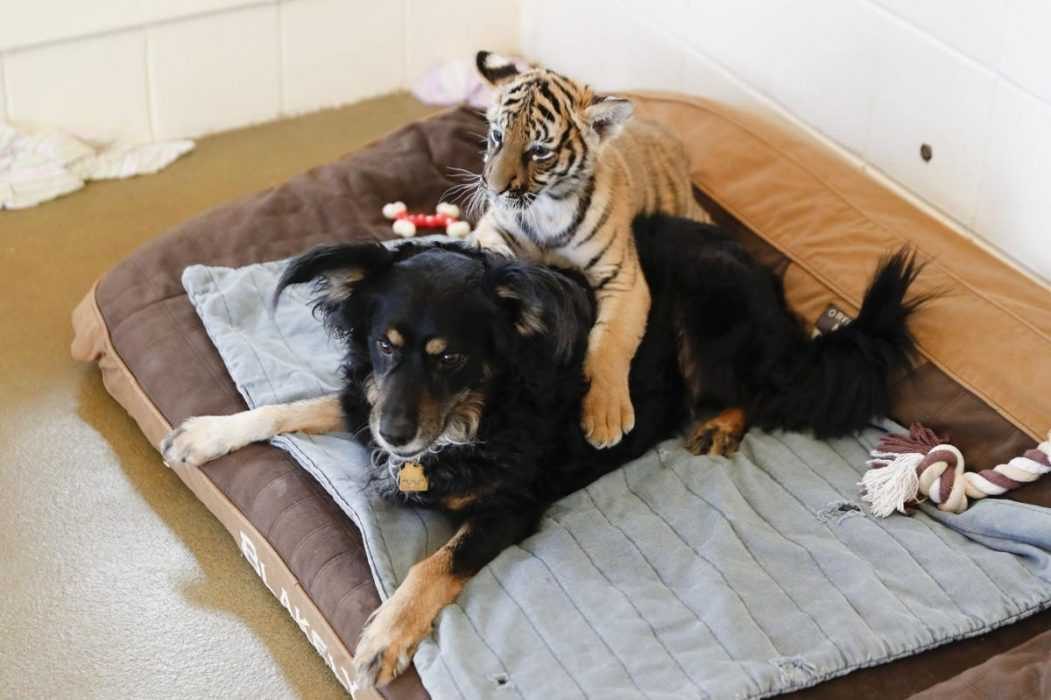 Blakely is an Australian Shepherd whose natural instincts are to look after the heard. English sheepdogs are also specialists in keeping the herds together. Here is Blakley with one of the tiger cubs he helped take care of during his time at the zoo. 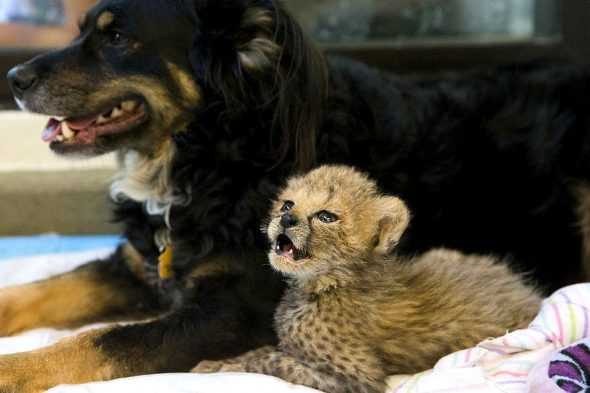 Blakely retired to life on the farm after the Cincinnati Zoo’s Malayan tiger cubs, Chira, Batari and Izzy, graduated to the zoo’s exhibits. Like the lion cub, the tiger cubs were also ignored by their mother — luckily Blakely stepped in to give some socialization and play lessons. 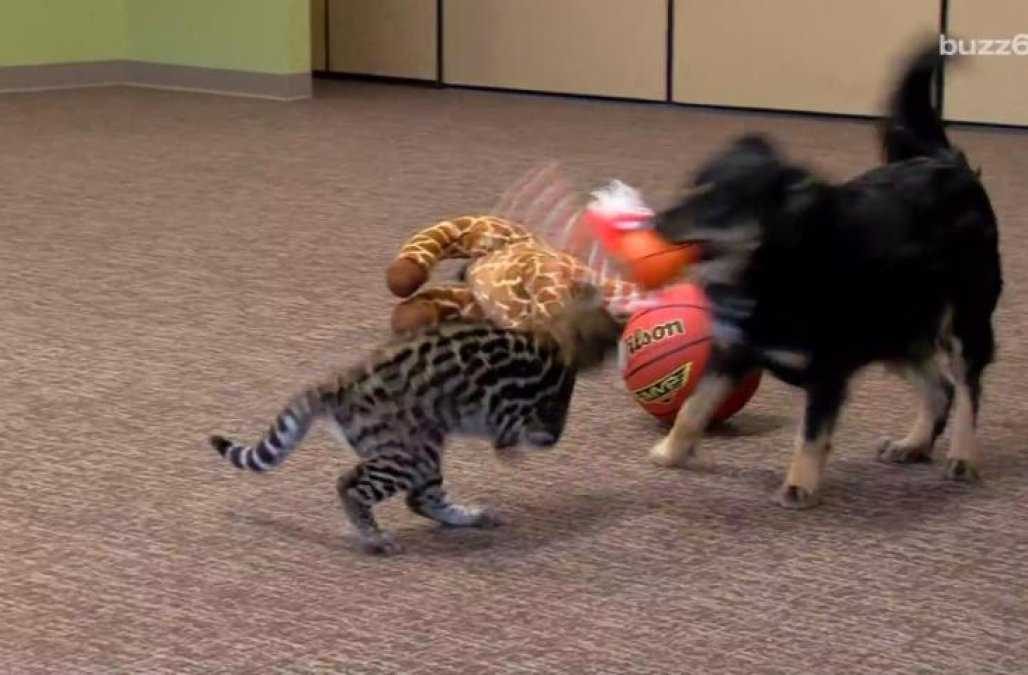 Blakely played a key role in socializing the Malayan tiger cubs. In addition to snuggles, he taught them when it was okay to play rough and when they needed to calm down.  Dawn Strasser, head of Cincinnati Zoo’s nursery staff said “This is something that their human surrogates can’t do.” 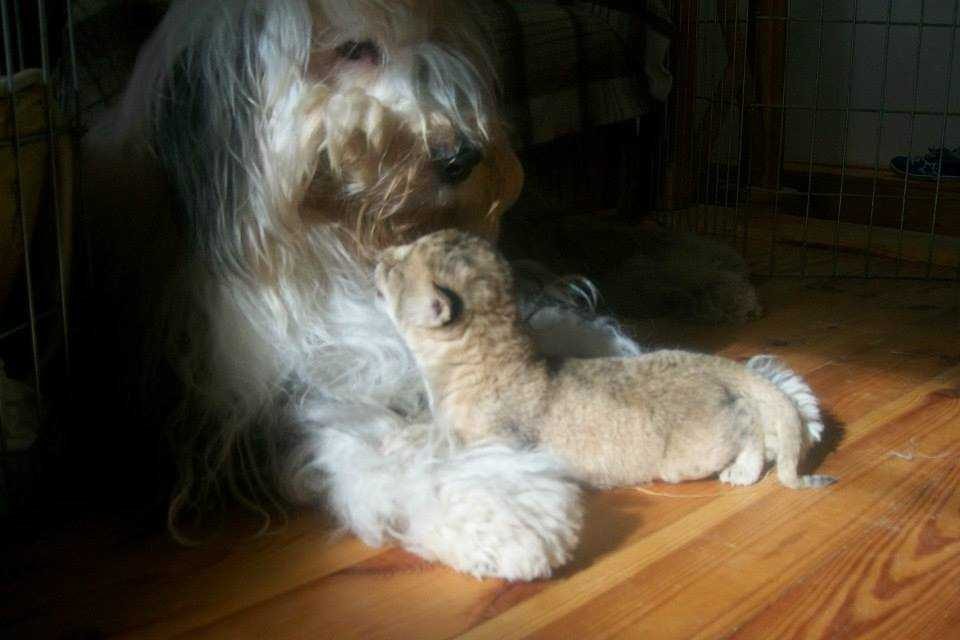 Zoo officials in Poland expect Parys to remain in Carmen’s care for the foreseeable future, as he learns how to interact with humans and other animals. And judging by how it’s worked for Blakley, this new unlikely pair should be just fine.