Angel Woman Saves Abandoned Kitten Who Had No Hope Left


When one woman came across a small abandoned kitten, she immediately knew that she had to help. She had no idea, however, that this tiny kitten with the saddest eyes would soon impact her life so greatly. In return, the kitten was eternally grateful to the woman and showed it in the most amazing way! 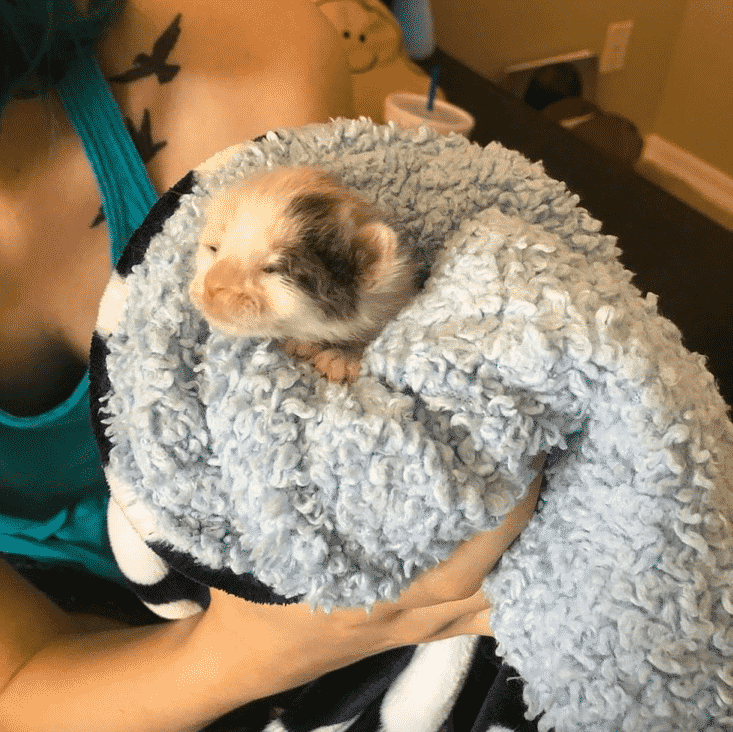 Sometimes in life, all we need is that one person who is willing to take a chance on us. When one woman came across a sad and helpless kitten in a shelter, she knew she wanted to give the kitten a chance. So, that’s exactly what she did. 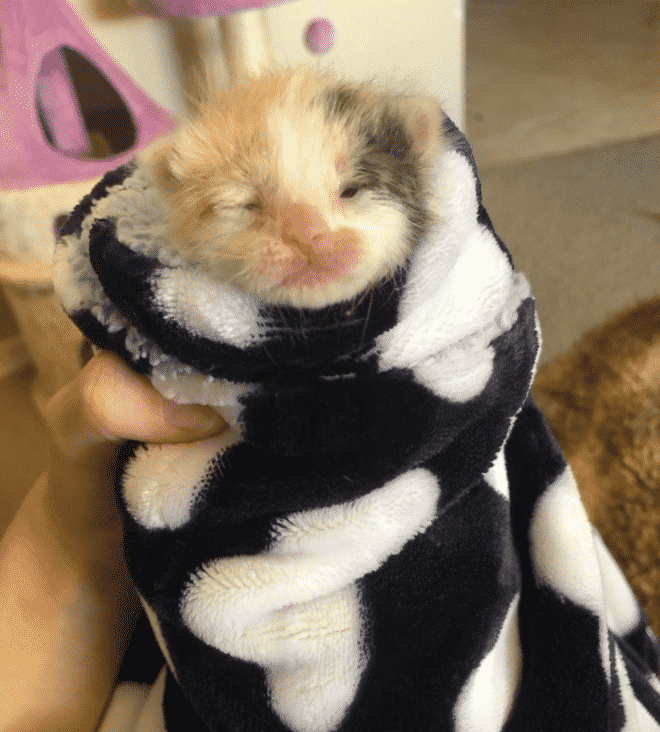 A motherless kitten was discovered outside all alone by a Good Samaritan. The wonderful person decided to bring the small kitten into a local shelter. The poor kitten was in need of some serious help. 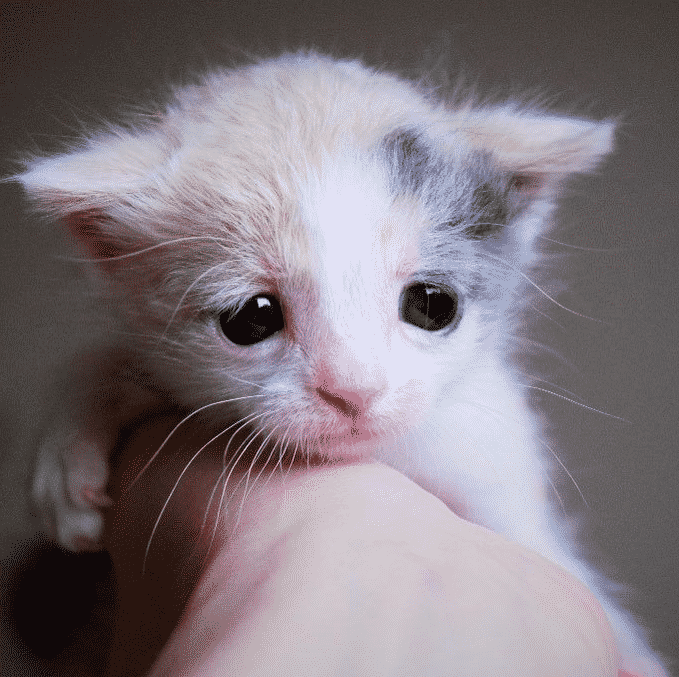 The tiny calico kitten was brought into the Arizona Humane Society. They promptly named her Cherie and instantly knew Cherie was in need of a foster home. After all, the tiny kitten needed personalized love and attention. 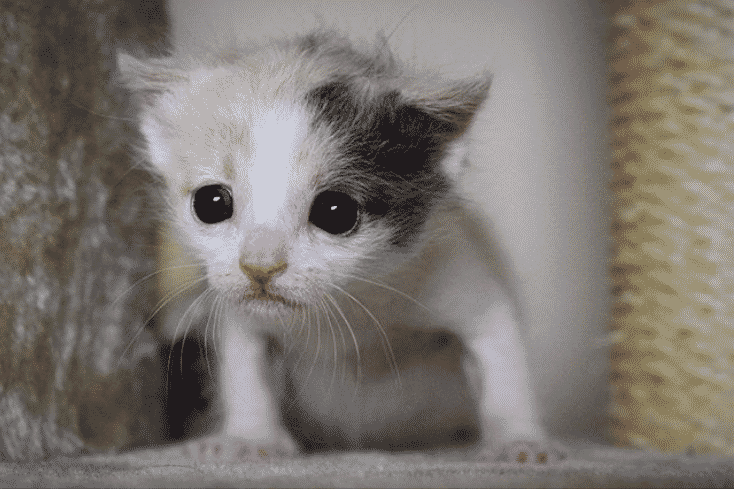 Little Cherie was in desperate need of a foster home. In fact, having someone there to care for her would make the difference between her surviving or not. That’s when a miracle happened! 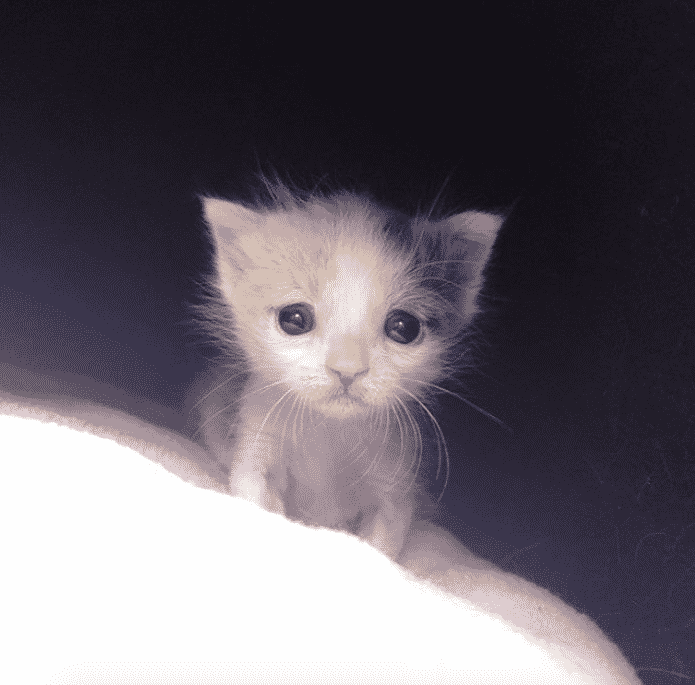 One day, Melinda Blain of Bottle Baby Fosters in Phoenix decided to head out to the shelter where Cherie was being kept. The tiny kitten was only five days old when Melinda first saw her. Melinda knew right away that a kitten that young was in need of extra love and attention in order to grow big and strong. 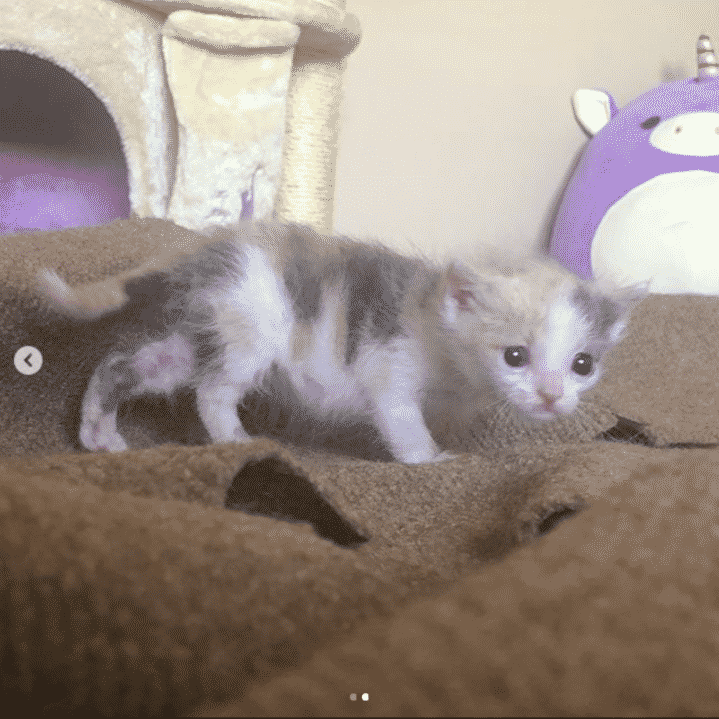 Melina immediately fell in love with Cherie and knew she couldn’t leave her behind. Melinda offered to be Cherie’s foster home until she was old enough to be put up for adoption. Still, Melinda knew that it would be a lot of work to care for a kitten so small and young. 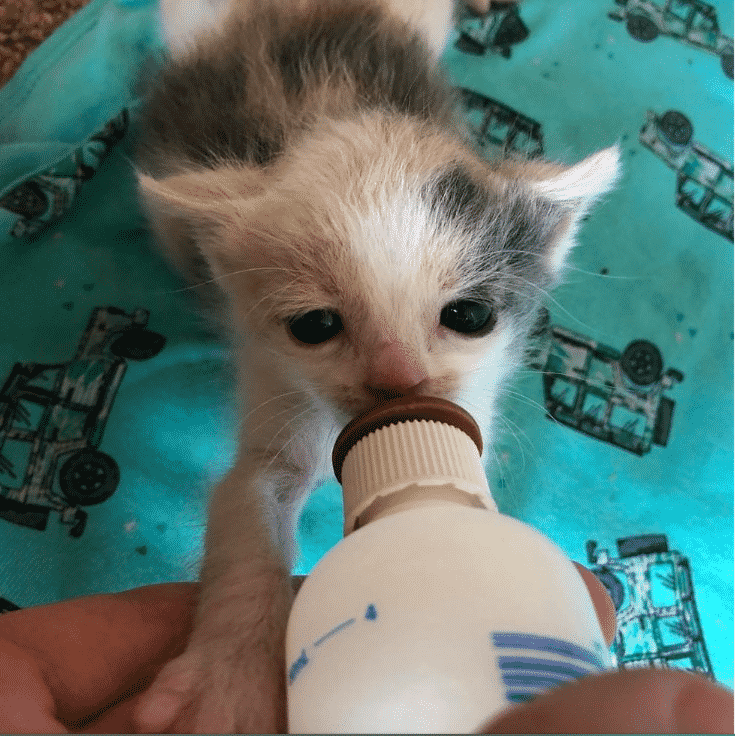 Cherie was very tiny for her age and she looked even younger than she actually was. The tiny kitten was also having problems latching onto the bottle. “She was not a huge fan of eating and was super fussy when I first got her. It was obvious that she missed having a mama cat,” Melinda told Love Meow. 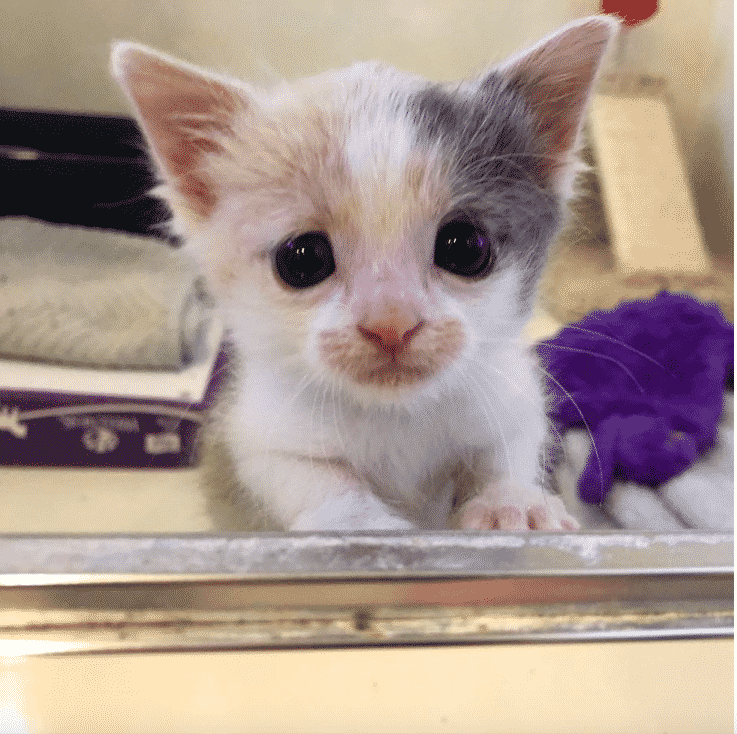 Despite Cherie’s fussiness, Melinda continued to be a dedicated foster mother. She was there for every feeding and over time, the kitten’s appetite came about. The kitten grew quite fond of her new mother and began to show her just how grateful she was in the cutest way ever! 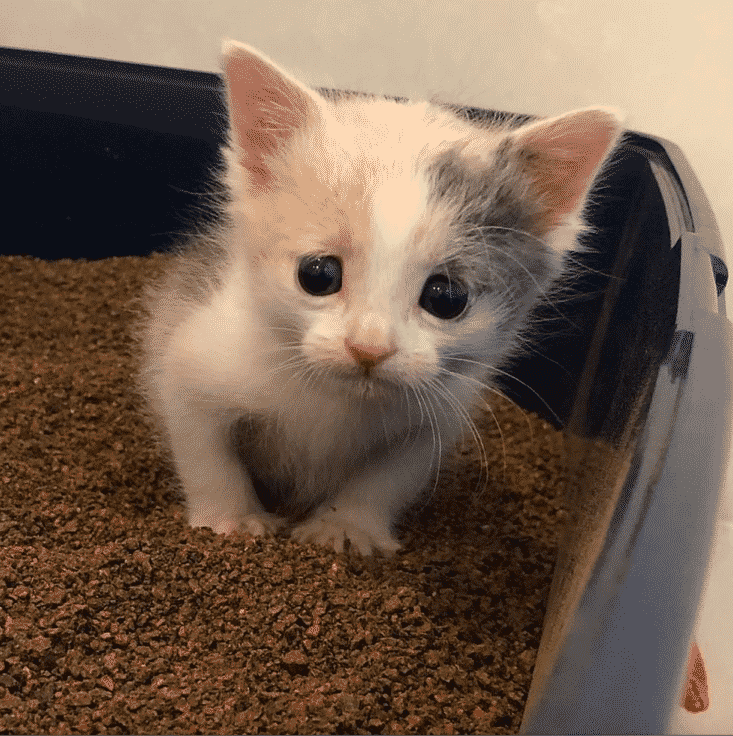 Cherie began to truly fall in love with the woman who had saved her life. She was so grateful that she began to snuggle up with Melinda ever chance she got! “After her first week with me, she became so attached to me and constantly meowed at me for snuggles when she heard my voice.” 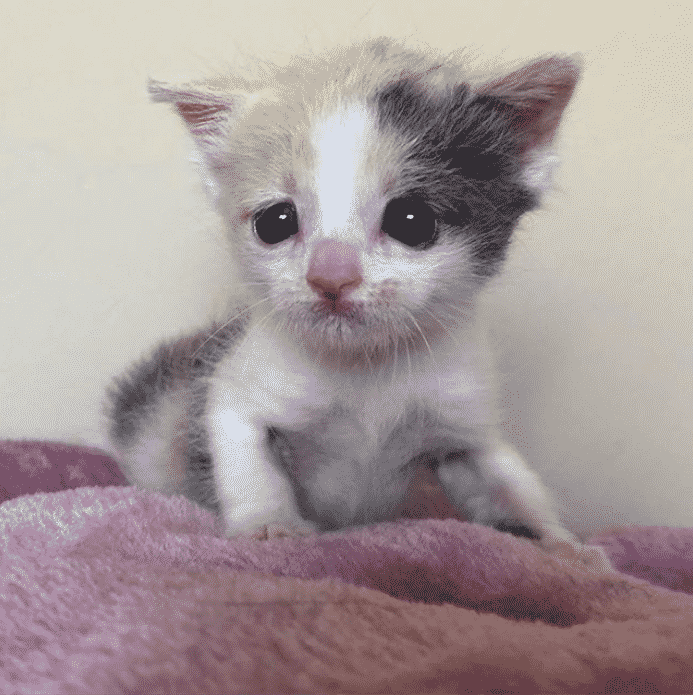 Not only was Cherie incredibly attached to her foster mama, but she also happened to have the most adorable pair of sad eyes. She absolutely hated being alone and she would cry out for her mom all the time. With sad eyes like those, her mother could hardly resist her. 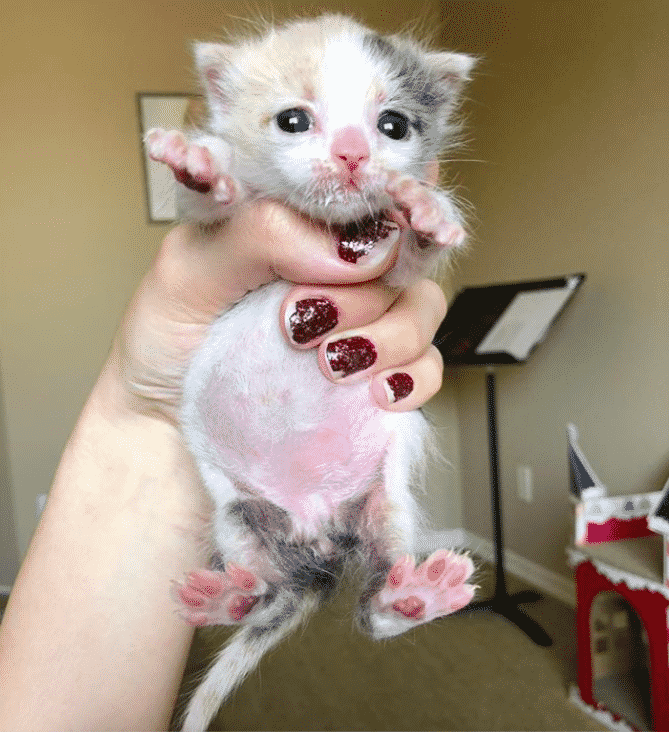 Neonatal kittens are at their most vulnerable stage of life. Their immune systems are incredibly weak and they need their mother’s milk in order to get stronger. Without their mother’s milk, many kittens in this stage don’t make it any further in life. 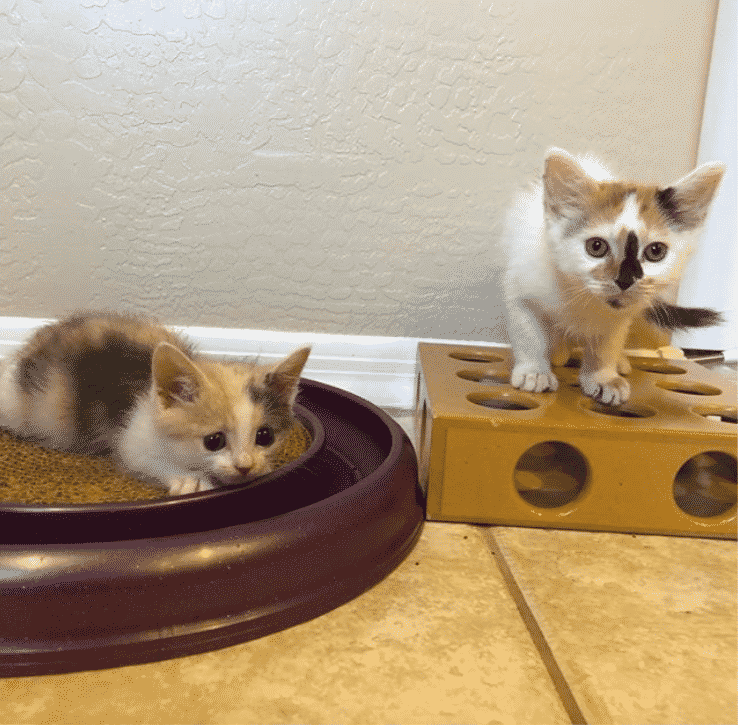 Understanding just how rare it is for a neonatal kitten to survive long without its mother allows us to see just how lucky Cherie was. Any longer without the proper care and Cherie may have not made it. Melinda happened to come around at the perfect moment. 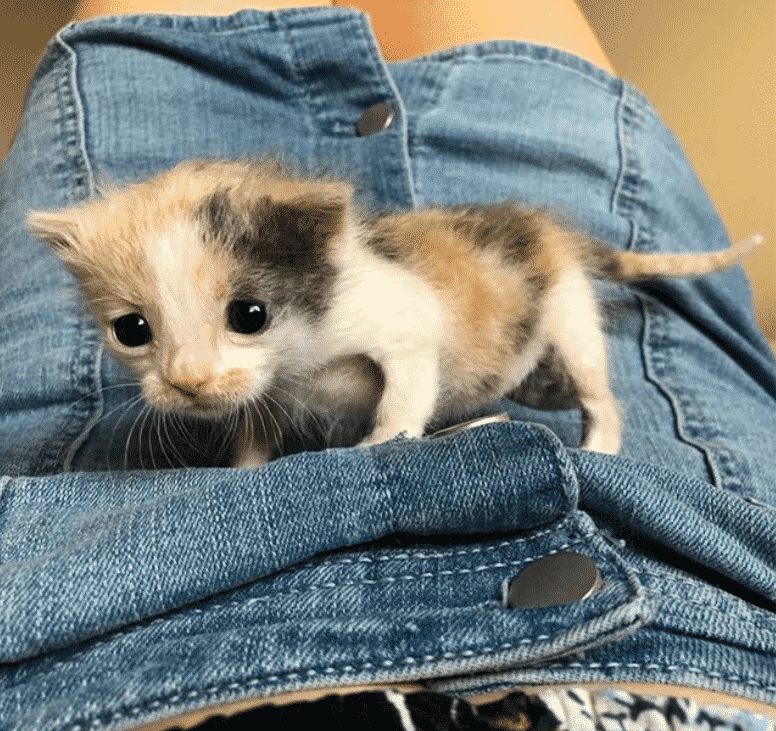 “Cherie purred all of the time and got so mad at me if she didn’t get after-meal cuddles and exploring time,” Melinda told Love Meow. Over time, Cherie became more and more independent. It wasn’t long before Cherie began to use the litter box all on her own! 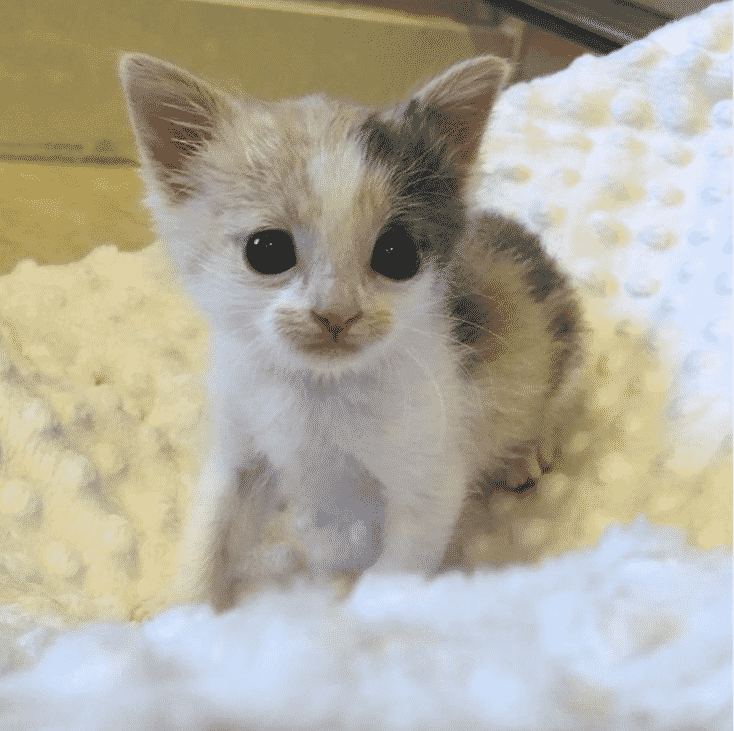 Despite becoming more and more independent, Melinda couldn’t help but give Cherie all of the extra love she would ask for. After all, looking into those sad “puppy eyes” would turn even the hardest-hearted person into mush. How could you ever say no to those eyes? 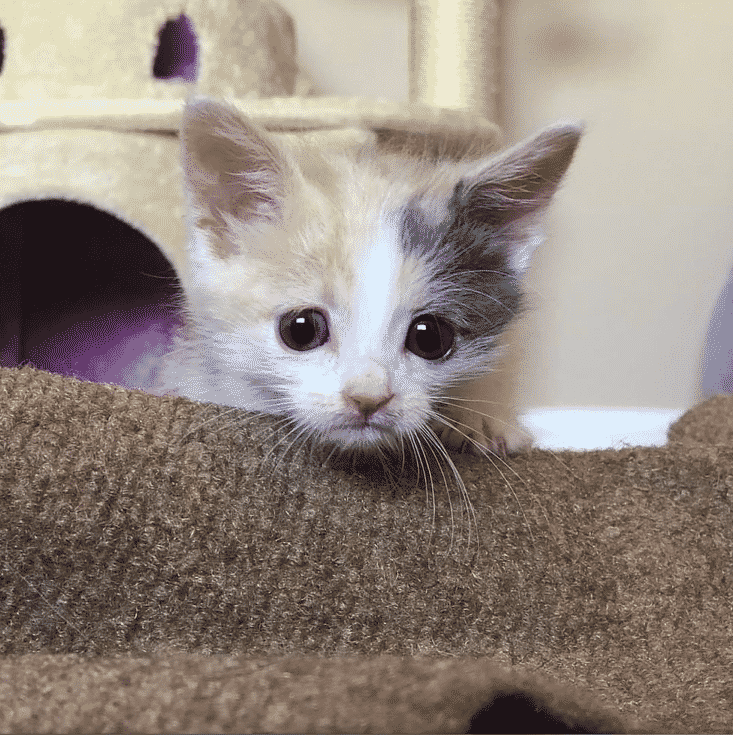 “When you’re actually a super happy kitty, but you give mom sad eyes so that she’ll extend your cuddle session,” Melinda wrote. Cherie continued to grow more and more, however, her adorable eyes still remained. Soon, she had quite the lively personality! 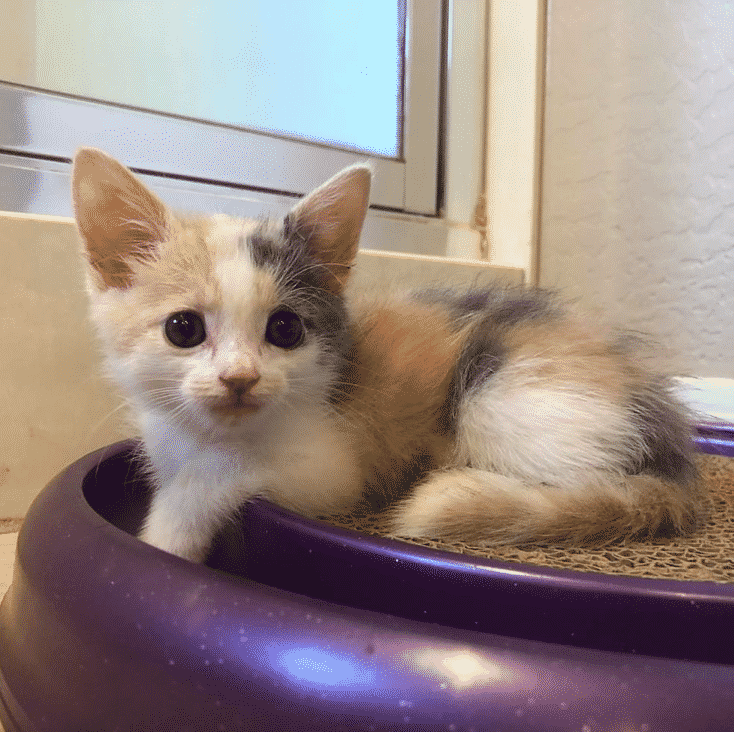 As she began to transition from liquid to solid food, Cherie’s personality also began to change. She became full of life and loved to play around. Eventually, she no longer needed to be kept inside of her nursery pen and she loved to go exploring around. 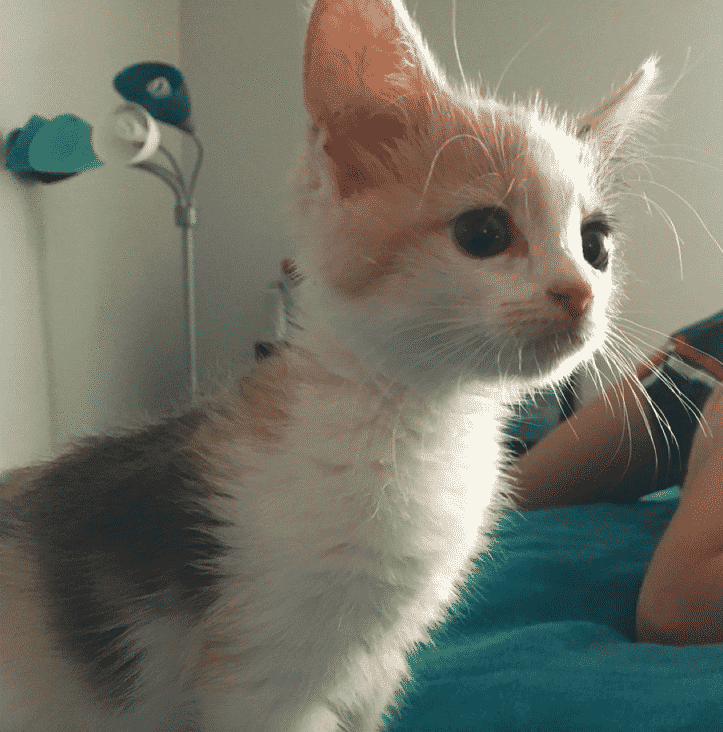 Soon, Cherie was exploring all around the house and loved to play with Melinda. However, she still couldn’t get enough of her mama and still demanded cuddle time. “She was still obsessed with me and I couldn’t ever resist her adorable meows.” 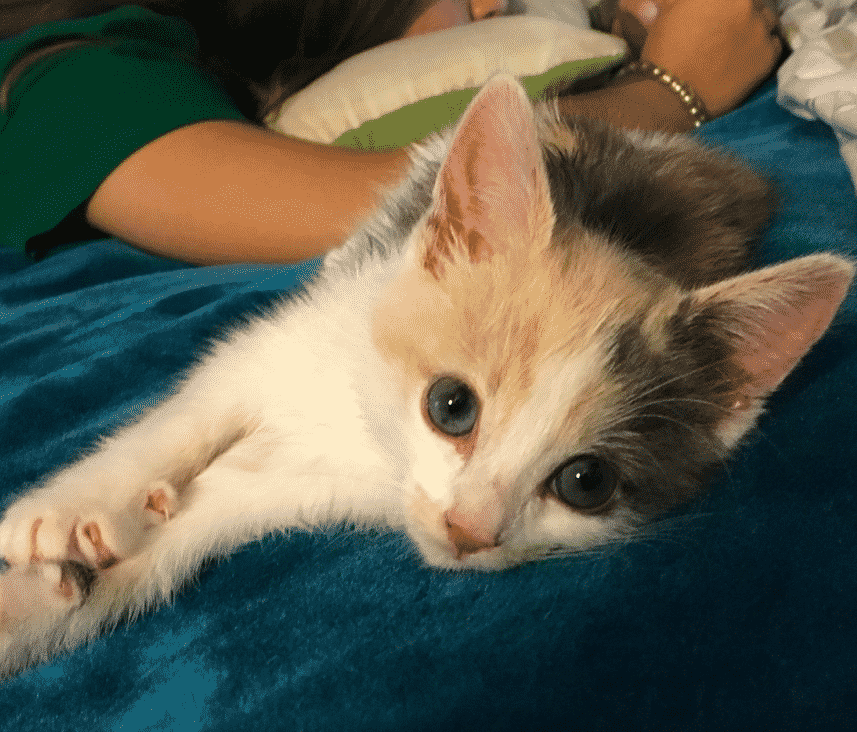 Eventually, Cherie grew up to be a perfectly normal sized cat. Despite being much smaller than average when she was a baby, Melinda’s dedication helped her grow-up nicely. She was finally big enough to be put up for adoption. 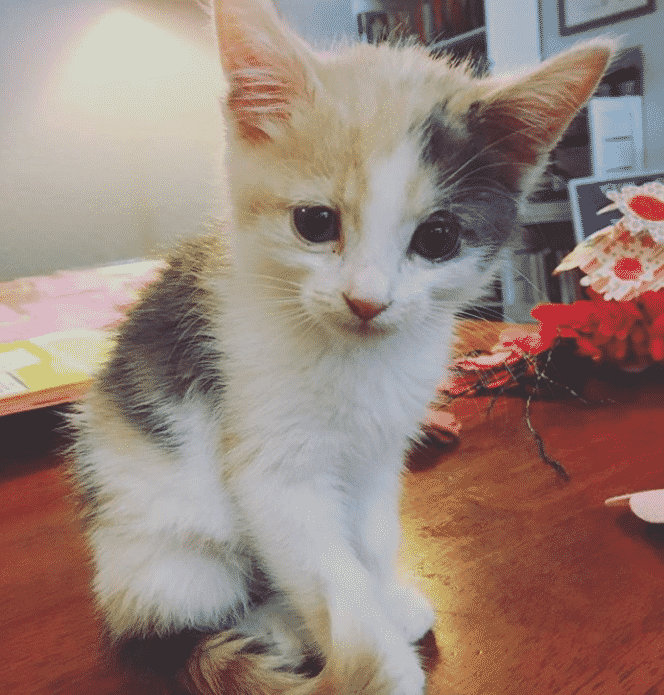 Once she was placed up for adoption, a family that had been watching her progress from day 1 immediately contacted Melinda. They knew that Cherie was the perfect cat for their family. She was quickly adopted by the loving family and renamed Waffle. 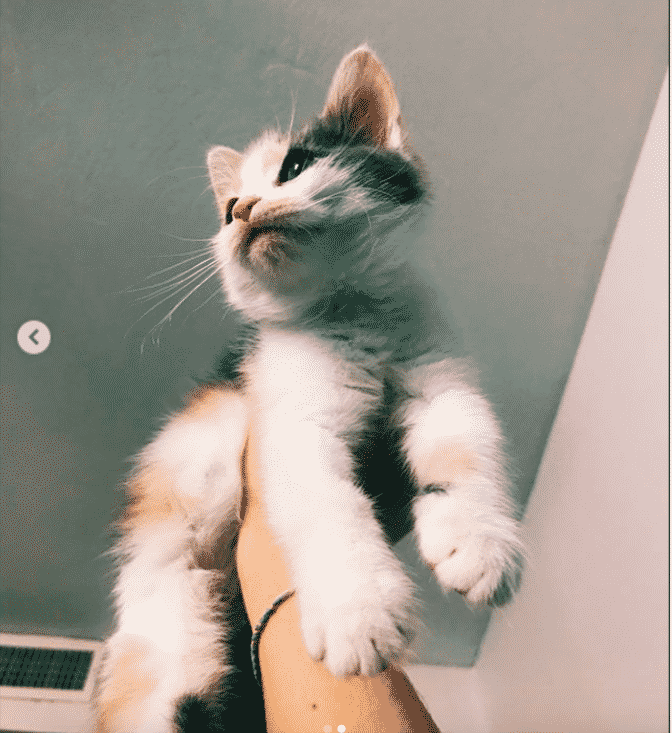 Waffle is now happier than ever in her new forever home. She has two feline siblings to play around with and adores her new mama. Looks like Waffle got the perfect happy ending!