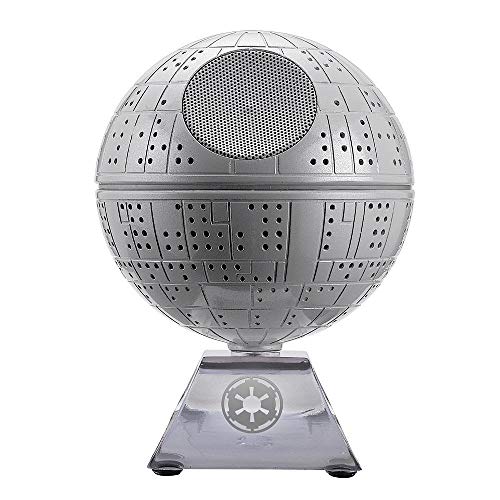 (258)
$139.99 $119.99
Bluetooth ... read more
(as of January 27, 2023 03:14 GMT -06:00 - More infoProduct prices and availability are accurate as of the date/time indicated and are subject to change. Any price and availability information displayed on [relevant Amazon Site(s), as applicable] at the time of purchase will apply to the purchase of this product.)

For all the computer hardware enthusiasts, here’s a fine product to add to your arsenal. This one’s called the Star Wars: Death Star Bluetooth speaker, which not only defies gravity (cough, cough… as long as the base unit’s charger is plugged in), and promises a sleek vibe of pure entertainment.

The question, however, is not the visually aesthetic looks of the Death Star speaker, it is more about where the product has been in the past. Some say that the Death Star Bluetooth speaker changed many hands before reaching planning earth. There has been an awful lot of inquiries made in that regard, and I found out that this product once complimented actual Death Star showers, urinals and executive lounges where most of the evil plans were made. One day, someone stole it and made a couple of copies to sell it to the present day audience of the online internet market.

Nonetheless, the Death Star speaker has gained immense popularity, and has become more of a necessity for stiff collar hoarders who can’t get enough of the franchise’s products. This Bluetooth speaker comes in a reasonably bigger box, which might inebriate you in terms of actual product size. I found out that the speaker nicely fit in the palm of my hand. It is light weight and holds perfect, or near perfect resemblance to the actual Death Star from Star Wars movie series. I’ll leave the philosophical contemplation to you as to how hard the on-board Death Star inhabitants rocked when they obliterated their enemies to smithereens.

While you are busy inspecting the tiny details on this speaker, you will also notice a 360-grille around its entire body. It means that the sound can be heard all around, no matter which area of the room you’re are standing in. The base houses two USB ports and a central charging point for the power unit. The USB ports can offer simultaneous charging for the Death Star speaker and your smartphone as well. For a $290 levitating Bluetooth speaker, you may think that it is easy to set it up. But, as it turns out, the actual levitation part was a real pain in the ass. In order to make the spherical structure float on the base, you need a bit of time and patience aside from a fully charged battery.

The thing is that there is a levitation point on the speaker’s base unit. You can start off by lighting up the speaker’s LEDs and then slowly hover it above the base. The sphere will automatically adjust to the central point before you can entirely let it go. By the way, once it is floating there, you simply need to nudge its side to make it spin on its own axis.

Once you have all the nitty-gritties in place, it is time to turn off your room lights. The internal lights on the speaker offer a spectacular view. The unit can be used as a dim light source on your bedside table. You can read Star Wars comic books or listen to sci-fi soundtracks as you go to sleep. Just make sure that the Death Star Bluetooth speaker doesn’t run out of battery juice. If it does, you will have to start all over with the “levitation trick.”