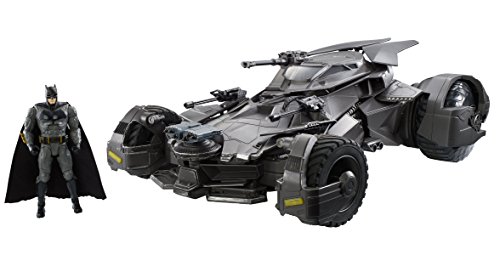 (422)
$399.99 $350.00
Prepare fo... read more
(as of February 1, 2023 22:31 GMT -06:00 - More infoProduct prices and availability are accurate as of the date/time indicated and are subject to change. Any price and availability information displayed on [relevant Amazon Site(s), as applicable] at the time of purchase will apply to the purchase of this product.)

Mattel took a nose dive into the RC (Remote Controlled) toy cars realm and came out with a bodacious high-profile product. The all-new Ultimate Justice League Batmobile is ready and set for an early release date in September. Right now, this smartphone controlled car is making rounds at various comic book expos to help spread the word about its awesomeness. Read more below… Ultimate Justice League Batmobile integrates smartphone application control with a large with variety of mobile phones. Mattel Co.’s idea is comparatively better than other toys manufacturers. Apparently, when you are matching a high-end RC car with anything out there, you have to keep in mind the modern-day technology.

Since most of the users are smartphone owners, why not go for a bad ass toy car which does the same job, sans an actual remote control? On the same note, if you are thinking of gifting the Ultimate Justice League Batmobile to a minor, don’t do that – lest you wisht to see this glorious car smashed to pieces. It is a high-quality toy made for adults, get it? First things first, Ultimate Justice League Batmobile is made the same way as the official life sized in movie vehicle. It means all the minor scuffing, worn out battle looks and everything is distinctively identical to the real deal. Moving on, they also added a bit of gadgetry to the car. It has tons of hardware improvements over previous Mattel Co. releases – so much so that you will be quite satisfied with your purchase. I also hear that Ultimate Justice League Batmobile is going to be compatible with tablets too. Mattel is going to be introducing a simple mobile application which will synch the RC to the relevant device. Later, you will be able to control each and every function of the Batmobile RC with tiny little taps n’ swipes.

Here’s why you want to buy Ultimate Justice League Batmobile in the first place:; there’s a little Batman action figure sitting in the driver’s seat. Yes, he is removable and works just like any ordinary high quality action figure. It’s just that this little dude has got a mini camera over his left shoulder. If you ever want to see what the world looks like from Batman’s perspective, you turn on the camera feature from your smartphone/ tablet. What happens here is that the smartphone will redirect you to the Batmobile camera. Wherever the car will go, or turn, the camera will show you everything from the car’s cockpit. Plus, another cool thing is that if you turn the camera or the Ultimate Justice League Batmobile left, the front tires and the mounted weapons will move left.

Same thing happens whenever the camera and the Ultimate Justice League Batmobile are signaled to turn right. The front side Gatling Gun, Rocket Launcher and Missile Launcher will swivel in the same direction. This feature is really cool. Not a lot of toy RC cars have it. Such small details and functions are what bring the Ultimate Justice League Batmobile one step closer to realism.

So, What’s the Catch?

What’s the “catch”??? Well, you need to offer your first born to Rumpelstiltskin to get the awesome Ultimate Justice League Batmobile. For instructions on how to do that, don’t forget to send us an email, or leave a comment in the comments section below. Nah, I’m just kidding. I wish there was some kind of whimsical twist to buying the Ultimate Justice League Batmobile. Mattel will be sending this baby out to retailers somewhere before the start of September. Since it is already Aug 30, 2017, you can probably ask your nearest Toy Store to get the details on this product.

The on-going/ company released price tag is $250. Just in case, your retailer haggles for $350 or above, don’t give in. Even if there is an import duty or a customs clearance fee on these RC Batmobiles, the average cost does not have to gol above the $300 range. Above all, best of luck and don’t forget to have fun with your Batmobile.